Tsvangirai’s wife barred from seeing him

HARARE – The wife of ailing MDC leader Morgan Tsvangirai is being denied access to visit him in a Johannesburg hospital where the 65-year-old opposition leader is receiving medical treatment, his spokesperson has confirmed. 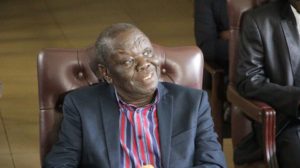 The Daily News can exclusively reveal that Tsvangirai’s family members are
refusing to allow Tsvangirai’s wife, Elizabeth, to see him at the
top-notch 190-bed Wits Donald Gordon Medical Centre (WDGMC).

Close relatives of the MDC leader accuse Elizabeth of backing MDC vice
president Nelson Chamisa to succeed Tsvangirai and fear she could put
pressure on him to facilitate his ascendancy to the throne without
following the party’s constitution.

The former prime minister’s wedding was dogged by court cases which denied
him permission to marry the imposing widow, Macheka, now 41, in either a
civil or traditional “customary” ceremony.

A customary ceremony went ahead regardless in front of hundreds of his
supporters in the capital and was blessed by a Catholic priest.

Tsvangirai’s first wife, Susan, died in a car crash in 2009 shortly after
Zimbabwe’s inclusive government was sworn into power.

The Daily News understands a war of words which almost degenerated into a
fist-fight erupted at the hospital last week, when Tsvangirai’s family
members tried to bar Elizabeth from seeing him, with physicians drawn into
the complicated family situation.

Tsvangirai’s son, Vincent, was reportedly restrained from assaulting his
step-mum after clashing with Elizabeth.

He reportedly vowed that she will never be allowed near his father as long
as he lives.

After considering what they thought was the best for the patient against
what the family wants, physicians at WDGMC resolved that only Tsvangirai’s
mum be granted access to him.

A staffer at the enquiry desk at WDGMC Paediatric and Adult Oncology unit
within the hospital – well-known as one of the best cancer treatment
facilities in the southern region – declined to confirm the reported
rancour the Tsvangirai family brought to the facility, citing
physician-patient privilege and patient confidentiality – which requires
health care providers to keep a patient’s personal health information
private unless consent to release the information is provided by the
patient.

Besides Tsvangirai’s mum, his entire family is in South Africa, including
his daughter Vimbai who is married into the Java family, Manase, Collins,
Vincent and family spokesperson Hebson Makuvise, who is Zimbabwe’s former
ambassador to Germany.

Tsvangirai’s eldest son, Edwin is said to be opposing family attempts to
stop his step-mum from seeing his ailing dad.

Yesterday, Elizabeth told the Daily News: “I will only talk when all this
is over, when my husband is out of hospital. Right now, I am concentrating
on my husband’s sickness. Whatever is happening, I have no comment. When
my husband is fully recovered, I will make a statement.”

A senior MDC official who declined to be named alleged the Tsvangirai’s
family was being manipulated by a top MDC financier (name withheld) with
ulterior motives for choreographing succession in the MDC.

“His wife was told to go away and could not see her husband. It is spousal
abuse,” he said.

He accused the family of abusing an ailing Tsvangirai for their own
interests, along with a cabal of MDC leaders pushing their proxies to
succeed the MDC leader.

“It has gone beyond theatre of the absurd into something ghoulish going on
macabre,” the official said.

Reached for comment yesterday, the spokesperson for Tsvangirai’s family,
Makuvise, demanded to know who had given the Daily News the information,
before denying knowledge of the ruckus.

“Akakutaurirai mubvunzei kuti why ari kurambidzwa (Your source must tell
you why she is being barred),” Makuvise told the Daily News before hanging
up his mobile phone.

Efforts to reach him later were futile.

Senior MDC officials said it was important that Zimbabweans pray for
Tsvangirai to recover, saying the family could disintegrate in his absence
over his estate.

Following his visit to Tsvangirai’s mansion in Highlands in Harare last
month, President Emmerson Mnangagwa assured the MDC leader that he will
work towards releasing his pension and other benefits, while also enabling
him to retain his imposing mansion acquired for him when he was prime
minister in the inclusive government of 2009 and 2013.

Finance minister Patrick Chinamasa has since made the requisite
legislative changes to enable Treasury to release the money.

MDC insiders said the pension and other featherbeddings dangled by
government last month have added fuel to the discord in the 19-year-old
political outfit with his deteriorating health worsening the succession
fights in his party.

The Daily News can report that Tsvangirai has demanded that his wife be
given access.

A recorded conversation between the former union leader and medical staff,
captures a briefing the MDC leader got about his relatives’ rancourous
behaviour at the hospital facility, and he was told that security have
resolved to keep them out of the in-patients unit.

The staffer affirmed the primacy of the physician’s responsibility toward
the patient, and told the MDC leader, who was conversing in a weak voice
that the best interest of the patient comes first.

Tsvangirai then told the hospital staffer that there were unsavoury
motives and says: “I want to see my wife, I want to see Elizabeth.”

The Daily News can exclusively reveal that the hospital has now organised
surreptitious hospital visits for Elizabeth to manage the family dynamics.

The hospital also granted Tsvangirai’s wish to meet with Chamisa last week
for two hours after the MDC VP had again been barred by the ailing MDC
leader’s family.

Tsvangirai’s spokesperson Luke Tamborinyoka told the Daily News: “The
needless scuffles belittle the huge and towering brand of president
Tsvangirai. He has intimated to me some of the challenges but when
everything has been said and done, everyone must allow the president to
recover by giving respect to him, his wife and family but above all we
must accord the huge MT brand the dignity it deserves, especially as he
battles this cancer.”

The stressed wife has helplessly watched as her husband underwent a
gruelling chemotherapy regime, lost significant amounts of weight,
appearing gaunt and drawn.

As his caregiver, she watched him last year lose the majority of his hair,
a common side effect from cancer treatment.

His current prognosis is grim, amid fears he might not pull through.

Tsvangirai, 65, who was diagnosed with cancer of the colon in 2016, is now
receiving palliative care, an interdisciplinary care that provides quality
of life for patients with terminal illness.

Despite undergoing over a dozen chemotherapy sessions at the facility,
which was established in 2002 when the University of the Witwatersrand
(Wits University) bought the Kenridge Hospital with a founding donation
from the Donald Gordon Foundation, Tsvangirai has sadly proceeded to Stage
IV cancer, with the disease travelling beyond his colon.

The Daily News understands cancer cells have now been detected in his
kidneys and liver. But doctors were still battling to remove or shrink the
tumour. Tsvangirai was said to have suffered “organ failure.”

This is Tsvangirai’s longest period of medical leave, following brief
absences from mid-2016 when he publicly announced he was undergoing
treatment for cancer of the colon.

Officials have refused to disclose finer details of the 65-year-old’s
condition, only saying he was “critical but stable”.

There has been an “industry of lies” that has grown up around Tsvangirai’s
medical condition.

The ailing MDC president left Zimbabwe’s capital, Harare, in early January
and handed over power to his deputy, Elias Mudzuri.

Mudzuri was on Wednesday replaced as acting president by Chamisa after he
travelled to Cape Town, together with the other MDC deputy Thokozani Khupe
to attend a meeting for the formation of a new opposition coalition called
Zimbabwe Alliance.

The meeting was chaired by a member of the G40 faction and was condemned
by Mnangagwa at a Mashonaland Central rally on Wednesday as a futile plot
to oust him, being engineered by the Democracy Institute – a think-tank
based in Washington DC, founded in 2006.