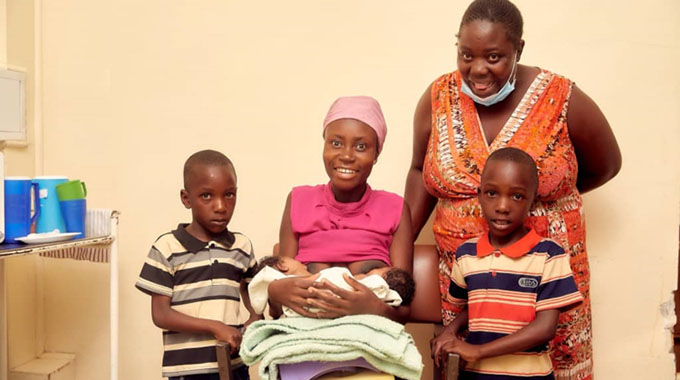 Seven years on, another team of local surgeons is confronted by a similar, yet more complex, procedure of separating another set of conjoined twins, Anotidaishe and Atipaishe.

The two-month-old girls were born conjoined around the abdomen. As a result, they share a liver and parts of their intestines.

While the 2014 operation was a roaring success, the case of separating Anotidaishe and Atipaishe is proving to be complex and novel owing to the twins’ different anatomy.

Dr Tungamirai Gwatirisa, one of the surgeons set to lead the exercise, told The Sunday Mail that his team faces a daunting task.

“In medicine we have a saying that no two operations are the same,” said Dr Gwatirisa.

“Even if we operate 100 children suffering from hernia, the operations will differ from one person to the next because the anatomy is different.

“In 2014, Zimbabwean doctors separated conjoined twins (Kupakwashe and Tapiwanashe), whose condition was almost similar to these two.”

He said while both sets of twins shared a liver, Anotidaishe and Atipaishe share part of their intestines, which was not the case with the first two miracle babies.

“There was no problem with Kupakwashe and Tapiwanashe’s genitals and urinary organs, but with Anotidaishe and Atipaishe, one of them has a bladder exstrophy, meaning there is no skin covering the bladder.”

The girls are using tubes to pass out stool.

One of the girls’ private parts is joined to the urethra, which further complicates the procedure.

Dr Gwatirisa said while the operation may seem daunting, he was confident that it would be a success.

“It is a complex operation; however, we know they can be separated and go on to live independent normal lives.”

However, before Dr Gwatirisa and his team can start preparing their operating theatre at Sally Mugabe Central Hospital, a major obstacle is threatening to scupper the ground-breaking procedure.

While the expert surgeons are on standby, the absence of critical high-tech theatre equipment worth over US$200 000 required for the operation has thrown spanners in the works.

They need specialised ventilators for minors, blood pressure monitors and bear huggers, a special temperature monitoring system used to keep babies warm during an operation. The theatre room needs to be air-conditioned.

In the absence of this equipment, the procedure, which was initially scheduled for last week, cannot go on.

Time is running out for the girls, as doctors and well-wishers race against time to raise funding to procure the equipment, which is available in Zimbabwe.

Dr Tungamirai Gwatirisa said time was not on their side.

“The operation was scheduled for Monday (last week) but the equipment was not available,” he said.

“What we need now is the equipment. The skills needed for the procedure are there; we are not waiting for anyone from elsewhere because we can do the operation on our own, but we do not have the equipment.

“We need about US$200 000 and the good thing is that the equipment can be bought locally.”

A crowdfunding GoFundMe account set up to raise resources for the equipment had pooled more than £2 000 yesterday.

“We are now appealing to well-wishers in the country,” he said.

The procedure will likely take hours to complete.

“In surgery we do not know for certain how long it will take. We think it is going to take longer than the first.”

Operating the bladder exstrophy, added Dr Gwatirisa, may take up to four hours if the child does not develop complications.

“The anaesthetists will require between two to three hours in the theatre. After that the babies are separated, the team of doctors will be divided into two, with each team focusing on one baby.”

Following the operation, the twins will be admitted into the paediatric ICU, where another team will monitor their recovery.

“The most important thing is to separate them and ensure that they are alive and that is why ICUs have to be adequately equipped.”

He said the procedure needs to be done immediately before the twins’ bones harden and also to prevent infections.

“The earlier we do the operation, the better. As an example, the issue with one of the baby’s bladder that is open is usually operated on within three days.

“This is so because if it remains open, it starts to swell.

“The bones will start hardening and at times it may become impossible to properly fold.

“The longer they stay in ICUs, they may contract what are called hospital acquired infections; these are usually resistant to antibiotics.”

The phenomenon of Siamese twins usually results from an occurrence called fission, which is when the fertilised egg splits partially; or fusion, in which a fertilised egg completely separates but stem cells search for similar cells on the other embryo and fuse the twins.

So rare are conjoined twins that their occurrence is estimated to range from one in 50 000 births to one in 200 000 births in the world.

They are known as “Siamese twins” after the famous pair of Chang and Eng Bunker from Siam, now Thailand.