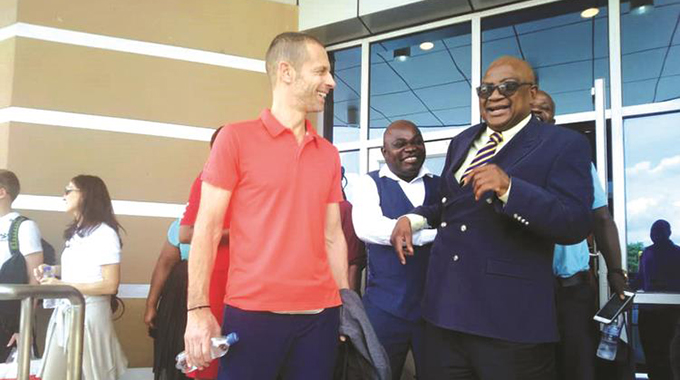 UEFA president Aleksander Ceferin and his wife Barbara arrived here yesterday for a vacation during which he will engage the local leadership on possible areas of cooperation in sport.

The Slovenian lawyer-cum-businessman was welcomed by Cosafa president Phillip Chiyangwa who was with them throughout the day as they toured the falls.

Considered Europe’s most powerful man in football, Ceferin is on a private visit for a holiday with his family, but said that will not stop him from engaging Cosafa for possible areas of cooperation.

“As you have heard, I am on a private visit here in Zimbabwe where I have never been before. I will speak about football in Zimbabwe and Cosafa,” he said in an interview soon after arrival at the airport.

During his 12-day visit, he is expected to visit some of the country’s resort areas in Binga, Hwange National Park, Matopos National Park, Great Zimbabwe and Vumba Mountains.

Speaking during a tour of the Rainforest later in the day, Ceferin said he was keen to explore areas of cooperation towards the development of sports tourism.

“Every town like this is also focused on sports tourism. If in addition you have this what else do you need?” he said, referring to the falls.

He said Victoria Falls could attract international clubs for camping if there was investment in infrastructure.

“I don’t know about infrastructure here as I haven’t seen any around, but we will talk with Philip. We just met a few hours ago and we will speak about everything.”

He could not hide his excitement seeing the mighty falls saying: “This is fantastic and very hot which is what we want in Europe. I see some water, I see a lot of water,” he said.

In the rainforest, he and his family posed for photos and at some point, he and Chiyangwa posed underneath the big Strangler fig tree pretending to be balancing it with their hands.

He and his family chose to drive themselves as opposed to being chauffer-driven the way other tourists and VIPs are driven around.

Ceferin has been to Namibia, Botswana, Tunisia and Tanzania, among other African countries.

Chiyangwa said Zimbabwe and the Cosafa region would benefit from the visit.

“There are already discussions underway in which the president and I will discuss all possible opportunities available in Zimbabwe, even outside sport, because he is also coming from a family of business. He might be discussing mining or agriculture

“This is the most powerful man in Europe by the way, so we are going to be talking tonight and tomorrow.”

He was voted sports personality of the year in the same year by Slovenian sports newspaper Ekipa SN, in a poll of newspaper journalists and readers.

In January this year, SportsPro Media included Ceferin in the list of the most influential people in the sports industry.

The Uefa president was also selected as one of the people of 2018 by the influential World Soccer magazine.

The family becomes the second-high profile set of international celebrities to visit the country and Victoria Falls this festive season following a visit by Hollywood stars Michael Douglas, wife Catherine Zeta-Jones and children Dylan and Carys.