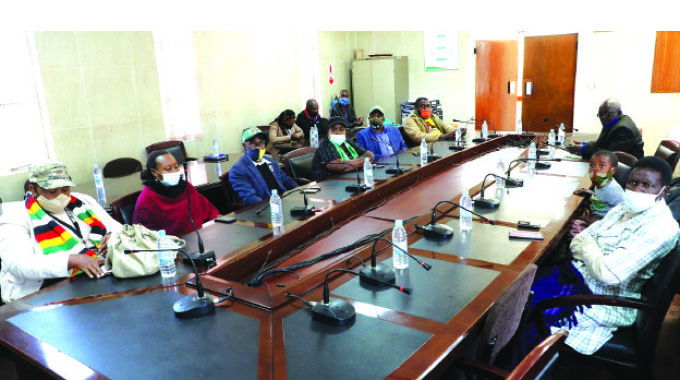 People from various walks of life yesterday celebrated the 41st Independence Day in various ways in their localities, with a few gatherings being witnessed, while the majority followed proceedings from State House on television and virtual platforms.

Although the celebrations were subdued due to restrictions to contain the spread of Covid-19, the small gatherings held in provinces and districts showed the resilience among the people and their determination to mark the important day.

All the gatherings, which were attended by at least 50 people each in line with Covid-19 protocols, observed the regulations to avoid the disease spreading.

The main ceremony was at State House, which did have more of the traditional elements than last-year’s anniversary held at the height of a high level Covid-19 lockdown.

The modest ceremony was attended by a restricted number of guests and dignitaries in line with Covid-19 guidelines.

President Mnangagwa and First Lady Amai Auxillia Mnangagwa arrived around 11am, followed by the singing of the national anthem and a fly past by Air Force of Zimbabwe jets.

Reverend Paul Damasane gave an Independence Dedication in all the country’s 16 official languages, before President Mnangagwa lit the independence flame and inspected the guard of honour mounted by the Presidential Guard.

Leaders of some political parties also attended the ceremony, with Mr Nobert Mutengezanwa of the United National African Council and chairperson of the Political Actors Dialogue platform of the thematic committee on information and publicity saying Independence Day was for every  Zimbabwean.

“This is a national day, it’s for everyone,” he said. “National Days should come first rather than our political differences. Everybody should enjoy.”

In Matabeleland South, the Independence celebrations were held at the Provincial Development Coordinator’s offices in Gwanda.

Minister of State for Provincial Affairs and Devolution Abedneco Ncube led the proceedings.

In the Midlands, the celebrations were held at Mkoba Teachers College Hall where a sizeable number of people were allowed to accompany the Midlands Provincial Affairs and Devolution Minister Larry Mavima to follow the President’s speech on a mounted huge screen.

Minister Mavima then arrived about minutes before 10am.

In his keynote address, Minister Mavima congratulated Zimbabweans for the milestone achievement of 41 years of Independence.

He thanked the people of Zimbabwe for observing the World Health Organisation and national regulations which saw the province registering low Covid-19 related deaths.

Minister Mavima implored citizens to refrain from complacency and continue adhering to health protocols, like social distancing and masking-up, among others, aimed at containing the global contagion as the pandemic was still to be defeated.

In her welcome remarks before the President’s speech, Minister Mliswa-Chikoka said the Covid-19 pandemic had made the rest of the nation to celebrate the day indoors in a bid to save lives and combat its spread.

“As we commemorate this day, let us forever cherish the sons and daughters who fought to bring about the democratic, peaceful and inclusive society we enjoy today,” she said.

Speaking after the event, Mashonland West provincial chairperson of the Zimbabwe National Liberation War Veterans Association, Cde Cornelius Muoni, said as the nation celebrated Independence, there was need for war veterans and the Government to continue emphasising on what happened during the liberation struggle for the benefit of born-free generations.

In an interview, Senator Mavhunga congratulated the country for attaining 41 years of Independence.

As the winter wheat farming season approaches, she urged the province to participate successfully and achieve a bumper harvest.

On a sad note, Sen Mavhunga announced the deaths of two war veterans in the province — Cdes Johannes Nduna and Misheck Zvamashakwe.