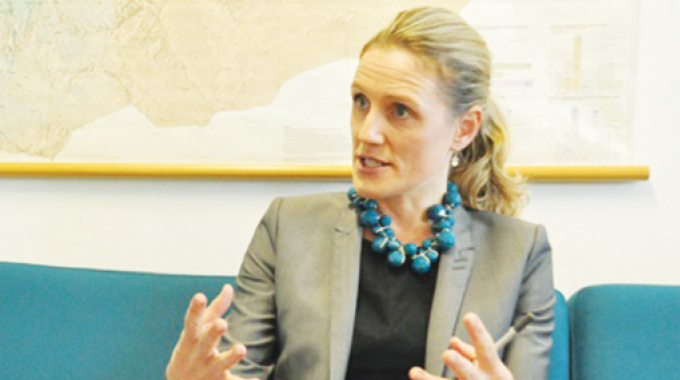 The Zimbabwe Resilience Building Fund is helping the nation to safeguard the effective management of the environment, said the United Kingdom (UK) Ambassador to Zimbabwe Melanie Robinson.

The fund, an initiative by the UK government in collaboration with other development partners, has the overall objective of contributing to increased capacity of communities to protect ecosystems.

Ambassador Robinson said that healthy ecosystems and rich biodiversity are fundamental to life on the planet.

“Many of us who visit or live in Zimbabwe are in awe of the incredible biodiversity we see here: animals, trees, plants, birds, bats, insects and so much more.

“I read recently about a tiny frog called the ‘cave squeaker’ that was rediscovered in Chimanimani in 2017. That frog hadn’t been seen since 1962.

“Chimanimani itself is a top area of biodiversity, I understand there are 90 species of bird in this area,” she said.

She said protecting ecosystems is also part of the obligation that countries have to meet under the Paris Agreement.

“Protecting biodiversity helps Zimbabwe and the UK meet their commitments under the Paris Agreement — the agreement that holds all countries to account for tackling climate change and its impacts to ensure the planet survives.

“One way to protect biodiversity is to ensure at least 30 percent of land including water is protected to be restored and able to operate in balance,” Ambassador Robinson said.

She made the remarks on the occasion of the International Day for Biological Diversity or World Biodiversity Day. This is a United Nations sanctioned international day for the promotion of biodiversity issues.

The Convention on Biological Diversity was inspired by the world community’s growing commitment to sustainable development and it represents a dramatic step forward, in the conservation of biological diversity, the sustainable use of its components, and the fair and equitable sharing of benefits arising from the use of genetic resources.

In Zimbabwe, biodiversity is under threat and sustainable solutions need to be actioned to preserve the country’s ecosystem.

Deforestation has been occurring at an alarming level since 2011 in peri-urban areas due to commercialisation of fuel wood by desperate urban residents in the face of frequent power outages.

The current deforestation rate is more than 330 000 ha/year. Also, changes in land use has been the main driver for ecosystem change, especially through expansion of agriculture.

Ambassador Robinson revealed that through the Zimbabwe Resilience Building Fund, the UK is assisting the country in implementing measures which will sustainably preserve the ecosystem.

“Through the Zimbabwe Resilience Building Fund, the UK and its partners are helping (tens of) thousands of Zimbabweans safeguard conservation practices to give them a more secure future.

“We have to be realistic: some biodiversity loss is driven by poverty and by the chance to make money. We need to ensure people can earn a decent living through better jobs,” she said.

“Covid-19 has further reminded us of the intimate relationship between people and nature. The current crisis provides an opportunity to recover better.

“We need to protect nature, restore ecosystems and establish a balance in our relationship with the planet and the rewards will be tremendous.

“By reversing biodiversity loss, we can improve human health, realise sustainable development and address the climate emergency,” he said.