POLITICAL polarisation, poor governance and a fragile economy have exacerbated people’s discontent with government, but President Emmerson Mnangagwa should address the root cause of the problems rather than engage in excessive use of force, a United Nations special rapporteur has said. 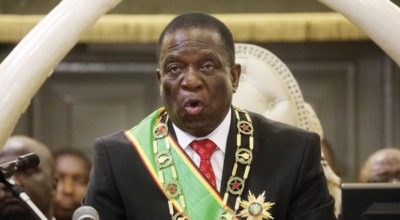 UN special rapporteur on the Rights to Freedom of Peaceful Assembly and of Association, Clément Nyaletsossi Voule made the remarks in his Monday report following a visit to the country in September last year to assess the human rights situation.

Voule, in his final report after his 10-day visit, said there was no justification for the State to brutalise citizens expressing their constitutional rights. The report was compiled after several interviews with government officials and the people in and outside Harare and Bulawayo.

Voule made special reference to the brutal killings of six people during the post-election violence of August 1 2018 where the military fired live ammunition on fleeing protesters.

The same thing happened in January 2019 when 18 people were killed after the military was deployed to quell protests triggered by Mnangagwa’s decision to hike fuel prices by over 150%.

“Regarding the use of force, the commission concluded that ‘the use of live ammunition directed at people, especially when they were fleeing was clearly unjustified and disproportionate’ and it added that ‘(t)he use of sjamboks, baton sticks and rifle butts to assault members of the public indiscriminately was also disproportionate’,” reported Voule, a Togolese national in his full report released on Monday.

“In the light of such events, the special rapporteur is deeply troubled to observe that, following these major events, which occurred between August 2018 and January 2019, there has been a considerable deterioration of civic space in the country, which has re-established an environment of persecution and fear.”

He said despite constitutional and legal provisions allowing for the deployment of the military to maintain public order or manage a public emergency, in both events, security forces were deployed without a clear mandate.

He said he had not received any information on the prosecution or indictment of the alleged perpetrators of the human rights violations committed during and in the aftermath of these particular protests.

“The special rapporteur is conscious that political polarisation, poor governance and a fragile economy exacerbated discontentment with the government and prompted demonstrations and strikes,” Voule said.

He recommended against the use of the army in enforcing public order as well as the realignment of laws with the Constitution to prevent a situation where government will use old pieces of laws to charge people under treason or undermining the President.

“Finally, the special rapporteur is of the view that, as a general rule, the military should not be used to police assemblies and that, in the exceptional circumstances in which this becomes necessary, the military must be subordinate to civilian authorities,” he said.

“For this purpose, the military must be fully trained, adopt and be bound by international human rights law and principles and any law enforcement policy, guidelines and ethics, and be provided with adequate training and equipment,” Voule reported.

Mnangagwa is still to implement the recommendations of former South African President Kgalema Motlanthe’s commission of inquiry into the August 1 2018 shootings and none of the identified perpetrators have been brought to book.