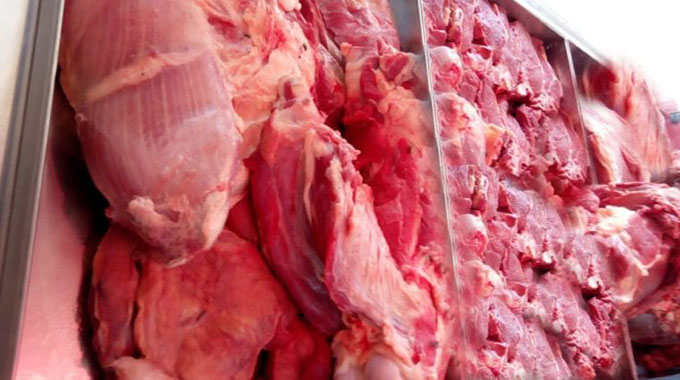 Precious Manomano
Herald Reporter
Some farmers and butchers are selling condemned meat from livestock affected by diseases such as January disease and anthrax, instead of burning the carcasses.

Although cases of tick-borne diseases are on the decrease, in some areas isolated cases of January disease and anthrax are still prevalent.

Some farmers in collusion with butchers slaughter ailing beasts, flogging the meat to unsuspecting customers on the cheap.

Anthrax, primarily affects animals, but can be transmitted to humans, leading to skin lesions, ulcers and if left untreated, blood poisoning can prove fatal.

He urged people to buy meat from reputable and registered butcheries.

Carcasses of cattle that die of anthrax or January disease, he said, must be burnt in the presence of a health inspector in terms of the health regulations.

“Meat from infected animals should not be consumed. Diseases can be transmitted from animals to the people for example anthrax and foot and mouth are dangerous diseases which can cause death,’’ he said.

“Anthrax is the major disease which is affecting people in the country, especially Gokwe area, where we received more cases of people who fell sick after eating meat from animals infected with diseases,” he said.

Midlands Provincial medical director Dr Reginald Mhene agreed that people had fallen sick with anthrax, saying he was yet to compile the figures of those infected.

“I have no statistics of the affected people, but anthrax cases are there in the province”, said Dr Mhene.

Masvingo City Council director of health and environmental services Ngonidzashe Mapamula said some uninspected beef is finding its way into butcheries in the cities, thereby putting the health of people at risk.

“It is a criminal offence for any butchery to sell or display meat that has not been processed in a registered slaughterhouse and inspected and certified as fit for human consumption,” said Mr Mapamula

Last year, Government launched an operation code-named “nyama yabvepi” where authorities intensified efforts to ensure that no sick animals are accepted for slaughter and no uninspected meat is sold.

In 2020, 87 people countrywide were hospitalised after eating meat from cattle affected by anthrax.

In Makonde, there was an unconfirmed report of one person dying, while 64 were hospitalised, while in Bikita, 28 people were reportedly diagnosed with the disease at different clinics.