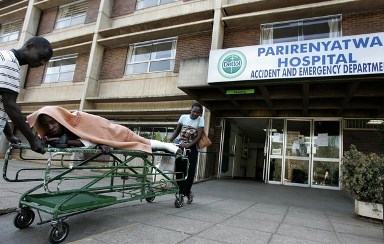 HARARE – Is the doctors’ strike about their conditions of service or the state of the health sector?

The correct answer is both.

I will briefly state the structural issues in the health sector then conditions of service for health workers (not just doctors).

Let us not defend this government which has failed in its mandate to provide health care to its vulnerable citizens.

The health care sector is performing poorly by all accounts.

No woman should die in child labour (these are healthy women dying in most cases).

Are doctors to blame? Doctors going on strike, does that really affect these rates?

So, what are the issues?

We have different levels of health care at hospital level.

There are clinics, district hospitals, provincial hospitals and then tertiary hospitals (these are Parirenyatwa, Harare, Mpilo, UBH and maybe Chitungwiza: these are hospitals where there are junior doctors usually).

We do not have a well-functioning referral system in this country.

To put this in context, we do not have district and provincial hospitals in Harare province, the tertiary hospitals serve that role (which is ridiculous).

Then the issue of ambulances: How many state ambulances are functional? How is a woman with complicated labour transported from one health facility to the next?

The government claims it doesn’t have money, but strangely it can splash on chiefs to win an election.

How many ambulances could they have bought with that money?

In Zimbabwe, we have an essential medicine list for different levels of health care.

I was in Harare, at Parirenyatwa in October 2018 where I got the shock of my life.

There was no aspirin (grandpa or disprin) in the hospital.

How can that be allowed to happen in a central hospital?

There were several other medicines which were not available including HCT which costs about a dollar or two for a month’s supply (this isn’t at a village hospital that we are talking about but a teaching hospital).

Government has stated that it has bought medications to restock pharmacies in the country.

Can government for purposes of transparency, using the country’s essential drug list and a check list, prove to the people that the medicines are indeed available?
Conditions of service

Let me start by mentioning that there is a shortage of doctors worldwide, especially specialists. In Zimbabwe, it is no secret that we are understaffed in the medical field.

We train a lot of doctors who end up leaving the country due to poor conditions of service.

For those who come back the government doesn’t want to facilitate their recruitment. I know of a radiologist who had to wait for a post at Harare Hospital (for treasury concurrence) until he decided he couldn’t wait any longer and he left the country.

A speech therapist (there are none in the public sector!) could also not be employed for the same reason.

Given that the medical school in Zimbabwe is not training these two, why is the government not trying to retain such talent?

How do you attract and retain such talent which is in demand worldwide (let’s not get it twisted, government needs doctors not the other way around)?

You have to pay them well!

Doctors are not asking to be paid the regional average for their level, which is, using conservative figures, 35 000 rands net a month.

They are simply asking for a living wage.

It’s not a luxury like an MP asking for a landcruiser, which the minister agreed to in a heartbeat.

In addition, due to the manpower shortage these young men and women are overworked.

The sacrifices they make will never be appreciated by the general public. I once, for example, paid US$75 (not RTGS) for a test for a patient as she couldn’t afford it.

I am giving just one example. Every doctor has done this.

Is being a doctor a calling?

There is a common misconception in this country that being a doctor or health care worker is a calling.

Being a doctor is not a calling.

One is trained to be a doctor. Politicians, who are not trained are paid more than doctors.

Isn’t that shameful? If being a doctor was a calling, we would not be having problems with doctors, would we?

It’s not only the volume of material you read, it’s psychologically demanding. If being a receptionist dealing with people is difficult, imagine dealing with ill individuals and their relatives who are at times grieving and frustrated? How do you handle a death after you have done everything you can to prevent it? Now imagine dealing with death when you know what you were supposed to do but you don’t have the medicines and tools to perform? The best solution is to stay away!

How does one end up being a doctor?

Choosing which profession, one is going to pursue is not easy. Unfortunately, some decisions are made for people (they got 15 points so law, medicine or accounting) or they haven’t thought through their choice with maturity.

Other people are forced into professions due to family circumstances, lack of exposure or because they struggled at school. I am going to talk about my profession, because I understand my field better.

Whenever one sits down to make a decision about a career, remuneration is always at the fore.

The benefits like feeling good about yourself, helping people etc are not top of your list, unless you are already a millionaire/billionaire.

This notion that one is called to be a doctor is absolute nonsense.

Medicine is not a calling, it has requirements. You won’t be sleeping at night and a light shines and you hear a booming voice, “John my son, you should be a doctor, it’s your calling!” — if this ever happened to anyone, they were hallucinating.

To become a doctor you require the following:

a) Three science subjects with chemistry being compulsory at A level.

b) Usually 15 points, 3As. In rare cases, 14 pointers may be taken (usually females)

c) Five years of hard work. I sometimes joke with students that if you sleep for more than four hours in medical school and have a social life, then you won’t make it in medical school. Of course, it’s hyperbole, just to emphasise the hard work and sacrifice it takes to be a doctor

d) You need money! Without money, you cannot go into medical school. It’s the most expensive course at university with longer semesters and due to the huge volumes of work, staying on campus is encouraged.

If you read literature on medical school enrolment, you may find that there have been increases in the enrolment of medical students in past 15 years in the USA.

There will obviously be questions why this is the case. There is a shortage of medical practitioners worldwide, the profession is rewarding (financially as well as “spiritually”) and prestigious.

So, in essence, it’s a highly sought-after prestigious profession which pays you a lot of money! We have seen stories of doctors in Canada who went on strike after a salary increment cause they were getting a lot of money already.

A general practitioner working in government in Canada gets US$17 500 a month!

Coming back to Zimbabwe, we have some people in government (including a qualified physician) who believe junior doctors are medical students. It would be laughable if we thought they were joking. Whether doctors are classified as medical students or not; or even if they are shifted to another ministry, if there are structural issues
in the medical field there will still be strikes. Dialogue is the only way of resolving this impasse.

(1)  The functions of the Board shall be—

(a) to appoint persons to offices, posts and grades in the Health Service; and

(b) to create grades in the Health Service and fix conditions of service for its members; and

(c) to supervise and monitor health policy planning and public health; and

(d) to inquire into and deal with complaints made by members of the Health Service; and

(e) to supervise, advise and monitor the technical performance of hospital management boards and State-aided hospitals; and

(f) to set financial objectives and the framework for hospital management boards and State-aided hospitals; and

(g) to handle appeals in relation to disciplinary powers exercised by hospital management boards over members of the Health Service employed in any Government hospital; and

(h) to assist in resource mobilisation for the Health Service; and

(i) to exercise any other functions that may be imposed or conferred upon the Board in terms of this Act or any other enactment.

What is worrying is that health workers are not represented in this board. Is this board effective in dealing with issues to do with conditions of service of health workers?

Legislative reform is required to include and involve health workers in the improvement of their conditions of service (senior and junior doctor, nurses etc representatives).

Should the HSB be dissolved? Should we have a new health services act or amend the current one to get a better one?

Junior doctors get a basic salary of less than 400RTGS bollars a month (forget the on-call allowance: if u don’t go on call, you don’t get it).

One of the reasons this is the case is doctors are civil servants, meaning they are pegged against other civil servants like teachers, lawyers etc. a basic salary increment for doctors would mean every civil servant gets an increment.

I do not think the government is willing to move or budge. There are allowances which health personnel can still get like medical risk allowances and on call allowances, which are woefully inadequate.

A way forward would be to remove doctors from the civil service. They could be paid by their resident stations e.g. hospitals.

This takes away health workers (including nurses, radiographers etc) from civil servant status theoretically. This isn’t something new; universities are doing this already with lecturers etc.

As a disclaimer, universities are considered parastatals. Such an undertaking would mean decentralising health which in itself would be a disaster.

The challenge we face as a country is that a Political science graduate is negotiating the salary of a teacher, a doctor etc without any knowledge of the sector.

Funding for the health sector is something that we need to take seriously. We have the 5 per cent mobile airtime tax. We need to increase budget allocations for health to meet the Abuja threshold (15 percent — doesn’t mean just 15 percent is adequate but at least 15 percent).

If patients are paying for health care provision at public health care institutions (e.g. consultation fee which the doctor doesn’t get), where is this money going? We need to think seriously about this.

This is a summary of the problems in the health sector. Firing striking doctors will not solve the problems. We are already failing as a nation in primary health care, which theoretically doesn’t involve doctors!  Just compelling the government to act responsibly in provision of health is not enough, let’s give them benchmarks and targets each year governed by an Act of Parliament.

* Osler is an experienced Zimbabwean doctor who has been trained locally and abroad.