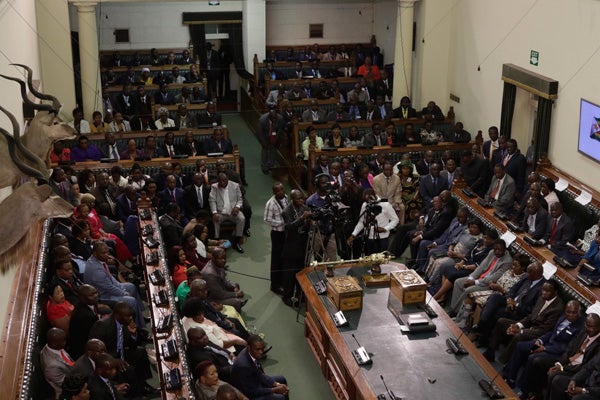 FORMER employees of Premier Tobacco Auction Floors (PTAF) yesterday appeared before Parliament, complaining over non-payment of salaries since 2015, with each of them now being owed up to $100 000.

The workers appeared before the Justice Mayor Wadyajena-led Parliamentary Portfolio Committee on Lands and Agriculture, where they alleged that PTAF shareholders — Owen Murumbi and Phillemon Mabhena — intimidated them for demanding their dues.

They said Mabhena had hired bouncers to harass farmers who raise concerns at the company.

Tendai Mavhu, a former employee, said they were getting their salaries on time when the company opened in 2012 until 2015 when payments became erratic.

“Since then, we have been experiencing suffering and we are not able to send our children to school or put food on the table. Workers then sought assistance from a legal aid and those that complained or sought assistance were dismissed and are at home,” Mavhu said.

Another former worker, Tawanda Murape, lamented that their bosses were corrupt and paid bribes to ensure that workers are not paid their outstanding salaries.

Lydia Chinyaukira, a former worker, added: “What surprised us as employees was that despite PTAF not paying workers, the Tobacco Industry Marketing Board would still issue a licence to the company yet workers spent two years without pay. Those fired were chased away without letters.”

Tapiwa Shepherd Mudinga, a former senior auctioneer, was almost in tears as he narrated before how he was kicked out of his lodgings, resulting in him living in overcrowded conditions with his three teenage children.