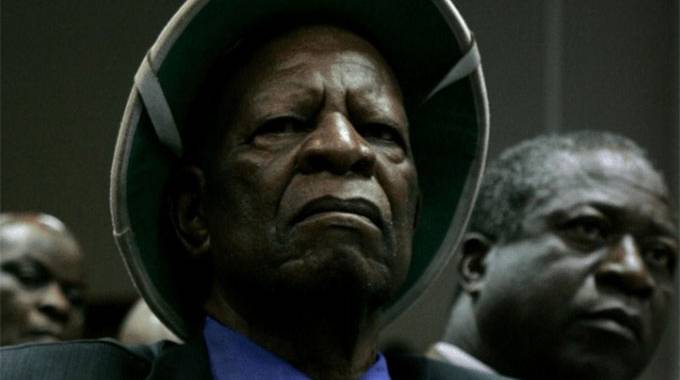 CHIEF Mashayamombe, born Ignatius Chiketa Kanengoni who died on Monday evening, has been described as a humble and straightforward traditional leader.

Permanent Secretary in the Ministry of Information Publicity and Broadcasting Services Mr Nick Mangwana confirmed the death in a tweet.

“We have received sad news that we have lost Chief Mashayamombe. He is reported to have developed breathing problems yesterday (Monday) and was taken to Norton hospital where he died upon arrival in the evening,” he said.

Mashonaland West Provincial Development Coordinator, Mr Josphat Jaji, describing him as a very humble person who was easy to work with.

“From the little time that I have so far spent here and from what I hear from those that worked with him for long, he was a simple and straightforward traditional leader,” he said.

“We are yet to receive the actual cause of the death, but suspicion has it that he might have succumbed to Covid-19,” he added.

Burial arrangements are yet to be made public. At one stage, Chief Mashayamombe was previously involved in chieftaincy wrangle involving three other families seeking to dethrone him.

Mashonaland Provincial Assembly of Chiefs had to convene a meeting with the warring parties. One, Mr Thomas Juta Hwakwakwa according to other aggrieved parties, was said to be the rightful heir, since it was not his family that was supposed to be in charge.

Chief Mudzimurema died on Saturday at his farm in Seke after a long battle with diabetes and stroke. He was buried yesterday at Mudzimurema Village.

Marondera District Development Coordinator Mr Clemence Masawi said: “It is with a deep sense of sorrow and sadness that we learnt of the passing away of Chief Mudzimurema.

“It is a great loss indeed. He was one of the few long serving traditional leaders. He worked hard for the development of the area under his jurisdiction and was a member of the Marondera RDC and prior to his ill-health, he actively participated in full council meetings.”

He did his primary education at Mudzimurema Primary School from Sub A to Standard Three before doing Standards Four to Six at Waddilove.

He then moved to Goromonzi District where he taught at Chinyika Primary School, before leaving teaching and started driving at a Chinese company. He worked at many other companies before venturing into business beginning in 1976.

Chief Mudzimurema was elected to the Mashonaland East Provincial Chiefs Council, which represents all chiefs in the province for two terms from 1998 to 2008, before being elevated to the Senate for a term of four years.