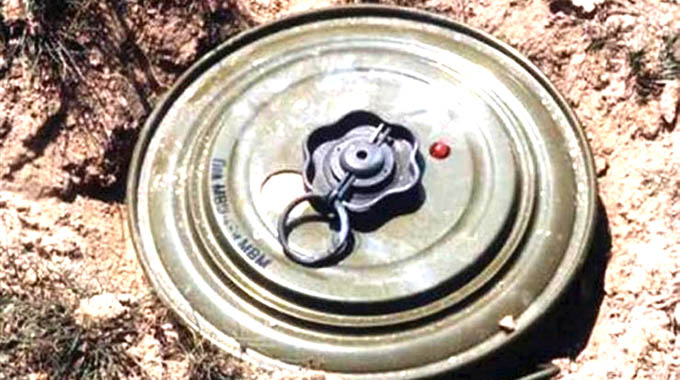 The United States (US) government cleared 6 551 landmines and explosive remnants of war (ERW) in Zimbabwe’s two provinces that share borders with Mozambique and Zambia in 2020.

This was revealed by the US Department of State Bureau of Political-Military Affairs, this week.

The report indicates that a total of 1,4m sq.m (357 acres) were cleared of landmines and is ready for productive economic use in Manicaland and Mashonaland Central provinces.

The US government has from 1998 to date, invested more than US$24 million for conventional weapons destruction (CWD) in the country.

The assistance released 9,1m sq.m (2 249 acres) of contaminated land to productive use and destroyed 42 861 landmines and other ERW over the past decades.

However, the US government indicated that Zimbabwe’s borderline villages were still heavily mined.

“Zimbabwe still retains dense anti-personnel mine fields along its borders with Mozambique and Zambia that kill and injure civilians and constrain economic development, particularly by killing livestock and preventing agricultural activities,” the report reads.

The contaminated areas stretch along Rusitu to Muzite, Sheba Forest to Leacon Hill in Manicaland and Mwenezi to Sango Border Post in Masvingo, which all border Mozambique.

Mashonaland Central villages bordering Zambia, such as Musengezi to Mazowe Stretch, Mazowe to Rwenya and Lusulu, were also reported to be contaminated.

US-based Zimbabwean analyst Pearl Chiweshe said it was unfortunate that some villagers who reside in contaminated areas were not free, as the country geared to celebrate its 41st Independence anniversary.

Villagers cannot fetch firewood, venture into livestock and agricultural farming, while their children have to learn to navigate the landmine infested forests at a tender age, as they make their way to and from school.

Landmines were planted by the Rhodesian Forces in the 1970s during the liberation war, mostly along border areas.

At Independence in 1980, Zimbabwe was left with seven major mined areas along its borders with Mozambique and Zambia, and one inland minefield laid by the Rhodesian Army.

Initially, anti-personnel mines were laid in very dense belts (on average 2 500 mines per km of frontage) to form a so-called “cordon sanitaire,” with up to 5 500 mines per km in some places.

Overtime, this cordon sanitaire was breached or subject to erosion. In response, in many sections, a second belt of “ploughshare” directional fragmentation mines protected by anti-personnel mines was laid behind the cordon sanitaire.

Anti-vehicle mines were used extensively by armed groups, but most were detonated by vehicles or have since been cleared.

President Emmerson Mnangagwa claimed he tiptoed dangerous landmines along the Mozambique-Zimbabwe border when he fled from his predecessor, Robert Mugabe, following a nasty fallout in 2017, before the military coup.

According to Zimac’s revised mine action work plan for 2020–2025, a total of US$65,6 million is required by the mine action programme to meet its extended Article 5 deadline by 2025.

Zimac indicated that the government has been committing
US$500 000, annually to the project. This could take over a century to complete decommission contaminated areas if the country is to depend on the current government funding.

The post ‘US demines 6 000 explosives in Zim’ appeared first on The Zimbabwe Independent.