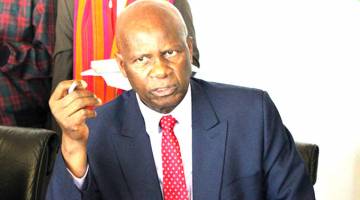 This was after Zanu PF acting spokesperson Patrick Chinamasa called Nichols a “thug” and accused him of funding the opposition ahead of planned anti-government protests on Friday which authorities say are meant to overthrow the government.

Chinamasa stroked a diplomatic row when he threatened to declare Nichols persona non grata for allegedly backing opposition and the civic groups to push for the ouster of President Emmerson Mnangagwa.

US Assistant Secretary of State for African Affairs Tibor Nagy said Washington was not surprised by Zanu PF actions, but had since summoned the Zimbabwean ambassador, Machivenyika Mapuranga to explain the “offensive” outburst.

“Comments from Zanu PF, while sadly not surprising, are deeply offensive. We have summoned the ambassador of Zimbabwe to explain,” Nagy said.

Relations between Zimbabwe and the US have been frosty since Washington imposed sanctions on Harare in 2001 under the Zimbabwe Democracy and Economic Recovery Act following a chaotic land reform programme which the government says was meant to resettle landless blacks.

Zimbabwe Council of Churches (ZCC) general-secretary Reverend Keneth Mtata said: “We hope our government will out of respect for the Constitution and decency; distance itself from calls that citizens be violent to each other and the ghastly labelling of opposition political parties as terrorist groups.”

Mtata said Zimbabwe, facing hunger and struggling with its economy, needed to be engaging with its citizens peacefully and also having cordial relations with nations that are assisting to feed her people.

“Government has to distance itself from the disrespectful and inhospitable language against our diplomatic guests, we need to build peace, love and respect for each other and build a nation especially in this time of crisis,” he said.

The church made an attempt to bring political parties to the negotiating table in an effort to stall the July 31 demonstrations and bring a solution to the failing economy.

The meeting, attended by 17, political parties failed to gain traction after it was snubbed by Zanu PF and the MDC Alliance.

MDC Alliance spokesperson Fadzayi Mahere said labelling of the MDC Alliance as a “terrorist organisation” by Chinamasa was an attempt to silence government critics and justify acts of violence against the opposition ahead of the protests.

“The clampdown on our members is unconstitutional, colonial and the latest in a series of attacks by the State in an attempt to stifle the main opposition, further shrink the democratic space and distract attention from the national crisis and governance failure of Mr Mnangagwa. The State is at war with its citizens,” she said.

MDC Alliance treasurer-general David Coltart said: “My take on Chinamasa’s rambling statement (is) they are panicking and petrified of the Zimbabwean people who are tired of Zanu PF’s abuse of power. Calling the US ambassador a thug was silly and only complicates life for Zanu PF going forward.”

Political analyst Rashweat Mukundu said the statement by Chinamasa was “irresponsible” and inciting.

He said Chinamasa should also be arrested.

“It’s the height of irresponsibility by Chinamasa as he is essentially instigating violence in Zimbabwe. If there is any semblance of law and order in Zimbabwe, then Chinamasa must be arrested,” Mukundu said.

“International engagement is dead and the ruling party has betrayed its lack of sense and decency by launching a verbal attack on a diplomat. It shows the lack of strategic thinking within government and their failure to deliver is leading to anger and the ruling party is now the biggest threat to the lives of the people of
Zimbabwe.”

Human rights group Heal Zimbabwe Trust said Zanu PF’s position had the potential to cause chaos in Zimbabwe and was regrettable.

“Comments by Chinamasa where he urged party members to use any means at their disposal to defend themselves on July 31, 2020, are insightful language that has potential of threatening the prevalence of peace in Zimbabwe,” the Heal Zimbabwe Trust said.