ZIMBABWE has torched a diplomatic storm with the United States following remarks by key government officials, including Zanu PF national political commissar Victor Matemadanda, describing the US as “evil and killing blacks at will”. 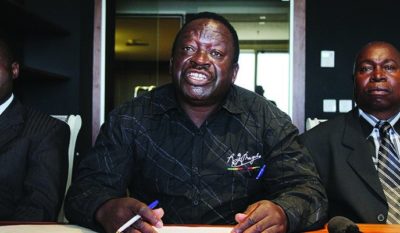 Matemadanda’s comments came after the Zanu PF youth league also issued a statement describing the continuous killing of black Americans as “crimes against humanity” being perpetrated by the US.

President Emmerson Mnangagwa’s spokesperson George Charamba has also waded into the fight saying the President Donald Trump administration was failing to protect its own citizens.

Remarks by Zanu PF and government officials have angered the US with Trump’s security adviser, Robert O’Brien, naming Zimbabwe as one of the countries whose statements over the death of George Floyd in Minneapolis, Minnesota last week have “fomented unrest”.

China and Iran were also named as some of the countries fuelling unrest in the US and were warned against the move as they would be dealt with.

Floyd died after a white police officer, Derek Chauvin, knelt on his neck, ignoring his pleas to let him loose as he was failing to breathe. His death has sparked international outrage amid calls for justice, but Harare has taken its protest a step further, describing the US as “evil.” Matemadanda, told journalists yesterday that the US wanted to act as the “Chief Justice” of the world. “So when America today decides to willy-nilly kill black people, we are not very much surprised. We know even if they are going to say justice will follow on this police officer involved in the manslaughter of George Floyd, there is nothing that is going to come. We know because they don’t count the late’s life as life that is worth living,” he said. He was referring to MDC Alliance MP Joanah Mamombe, activists Netsai Marova and Cecilia Chimbiri who were last month abducted and allegedly sexually abused by suspected State security agents. Zanu PF insists they stage-managed the abductions. They are in hospital and have been charged for allegedly breaking lockdown regulations and engaging in a demonstration with the intention of disturbing peace. US ambassador to Zimbabwe, Brian Nichols, in a statement after he was summoned by Foreign Affairs minister Sibusiso Moyo, described the killing of Floyd as “a tragedy that has filled Americans with horror and anger”, but was quick to remind Harare that his government at least did the honourable thing to arrest the accused, as opposed to the impunity experienced in Zimbabwe. “Remembering that commitment today, I again urged Zimbabwe’s government to end State-sponsored violence against peaceful protesters, civil society, labour leaders and members of the opposition in Zimbabwe, and to hold accountable those responsible for human rights abuses,” Nichols said. “Both America’s and Zimbabwe’s constitutions enshrine the right to free speech and peaceful protests.

We must forever conduct our struggle on the high plane of dignity and discipline. Yet peaceful protesters Joanah Mamombe, Cecilia Chimbiri and Netsai Marova were arrested, abducted and left for dead. To those who deny America’s right to speak on their fate, let me remind you. Injustice anywhere is a threat to justice everywhere…whatever affects one directly affects all indirectly.” Nichols said while his President (Trump), the police chief and all relevant officials have vowed to deliver justice on the matter, there was silence on the Zimbabwean officials’ part on when justice would be delivered on victims of forced disappearances like Patrick Nabanyama, Itai Dzamara and Paul Chizuze. O’Brien had earlier said: “I want to tell our foreign adversaries, whether it’s a Zimbabwe or a China, that the difference between us and you is that the officer who killed George Floyd, he will be investigated, prosecuted, and he will receive a fair trial.” “Our foreign adversaries are going to try to sow discord, and we are not going to let that happen… we have got a number of tools in our toolkits, working very closely with our allies.

There will be a response and it will be proportional. This is not something that our adversaries are going to get away with for free,” he was quoted as saying. “The American people that want to go out and protest peacefully, they’re going to be allowed to seek redress from their government, they’re not going to be thrown in jail for peaceful protesting. There’s a difference between us and you.” His comments were in apparent reference to several instances where the Zimbabwean government has been accused of violently quashing demonstrations and refusing to act on soldiers who fired live ammunition at protesters in August 2018 and January 2019 during protests. Zimbabwe has also been accused of ignoring calls for the arrest and probe of security officers who were behind the killings.

Moyo said the government was concerned with the comments made by O’Brien that characterised Zimbabwe as an “adversary of the US and taking advantage of the current unrest to sow discord”. “On behalf of our government, I have today informed US ambassador that Mr O’Brien’s allegations are false, without any factual foundation whatsoever and that they are deeply damaging a relationship already complicated by years of prescriptive megaphone diplomacy and punitive measures,” Moyo said. “Zimbabwe is not and has never been an adversary of the US. “Our fervent hope is that the situation in the US calms down, that civilian law enforcement agents and paramilitary units conduct themselves with maximum restraint, that community leaders succeed in persuading their citizens to honour the memory of Floyd by way of peaceful gathering and that no further life is lost.” Charamba had made several tweets, some of them that read: “I think the Zimbabwean government should summon the US ambassador to explain the goings-on in the US. This is an unusual, continuing and extraordinary grave threat to Zimbabwe’s strategic interest globally, and of course; a grave threat to international peace requiring invocation of the United Nations Chapter 7. “Clearly, the administration is unable to protect US citizens, in which case responsibility to protect stricture must kick in. The Sadc standby brigade is supremely ready to deploy all maximum means and capabilities needed to put out this raging fire.” The Political Actors’ Dialogue (Polad) yesterday called on Mnangagwa to discipline his lieutenants who were allegedly fuelling tensions with the US and soiling the platform’s re-engagement agenda. Polad deputy spokesperson Francis Danha of the #1980 Movement said the behaviour on social media by some top government officials, was against the calls for re-engagement with the family of nations.