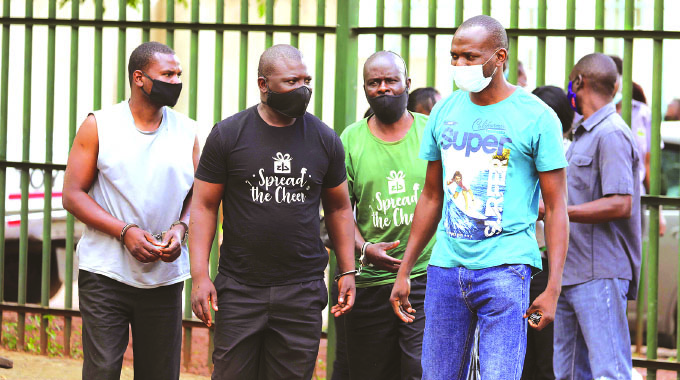 Three security guards who last week allegedly connived with six armed robbers to steal over US$2,7 million and $40 000 cash that was in transit appeared at the Harare Magistrates’ Court yesterday and were remanded in custody to January 13.

Nomatter Jonga (43), Mathew Simango (66) and Fanuel Musakwa (34) are being charged with theft.

Allegations against the trio are that they hatched a plan to steal the money and connived with the six suspected robbers, who are still at large.

The State, led by Mr Lancelot Mutsokoti, told magistrate Mrs Barbra Mateko that the police wanted to continue with investigations and reconcile the version of how the incident occurred since the three were giving different versions of what transpired when they were allegedly robbed.

They were travelling in a Toyota Hilux single-cab with a canopy, secured with a tracker and emergency panic button.

It is alleged that Jonga, Simango and Musakwa picked three unknown suspects at the Westgate roundabout in Harare and drove to Inkomo tollgate, where they collected a box containing $43 090, which was supposed to be deposited at the bank.

They reportedly picked up three more men at Inkomo Barracks turn-off as they drove towards Chinhoyi.

Upon reaching the 60km peg, Jonga stopped the vehicle and a fake robbery was staged, the State alleges.

It is the State’s case that an Isuzu twin-cab immediately arrived at the scene with people who were armed with pistols.

Jonga, Simango and Musakwa surrendered their pistol and rifle before driving their Toyota Hilux for about 900 metres, where the gang offloaded the cash boxes into the Isuzu, which then drove off.