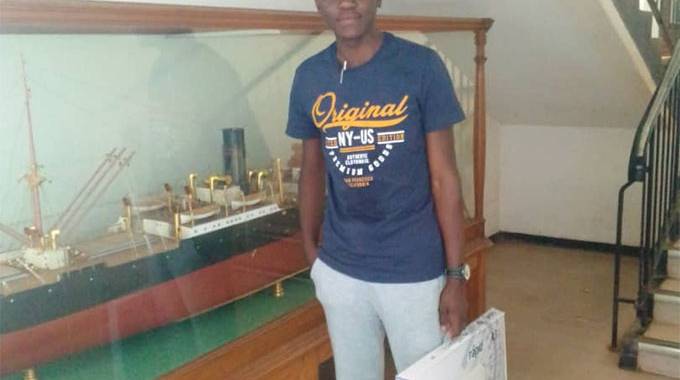 Steve John Mutapiri before the tumour

On Thursday February 4 this year, Zimbabwean woman Rebecca Mutapiri and her husband Alex, both based in South Africa, only managed to take their first short nap at 2am.

The couple had been awake the entire night and part of the morning, and they desperately needed a few moments of sleep.

Yet, as the clock ticked towards 4am, the silence of the quiet morning was shattered by a loud cry coming from one of their bedrooms used by her brother-in-law, SteveJohn.

This has been the reality in their lives.

SteveJohn, younger brother to Rebecca’s husband is a 21-year-old University of Zimbabwe (UZ) student and he has a huge tumour on his right shoulder.

He was diagnosed with the condition four years ago and has been getting treatment at Karanda Mission Hospital in Mashonaland Central, where he was previously operated on without success.

SteveJohn, too, has been having sleepless nights exacerbated by excruciating pain beyond imagination.

He is appealing for financial assistance for an emergency operation to remove the tumour. The operation requires R150 000, based on the quotation they were given by doctors.

Rebecca, who has been SteveJohn’s primary caregiver, yesterday told The Herald that his situation continues to worsen, and if the surgery is not done as a matter of urgency, they fear the worst.

She said well-wishers have been sending money, with some promising help. They now have half of what is required for the surgery to be done.

“We have received help from a lot of people from Zimbabwe, South Africa, the United States, and United Kingdom. Some are promising to help. People are helping but the money is not yet enough. We are halfway through. We believe in God and that we will raise enough money for the operation,” she said.

As they await more funds, she now spends all her time caring for SteveJohn, who because of the tumour, needs help with anything and everything.

“I am full-time on SteveJohn. I have my personal business, but I put everything on hold. He needs attention 24/7. He is not someone you can leave alone for an hour. To stand up, he needs someone to support him. To sit, he needs someone to help put pillows on his back,” said Rebecca.

She added: “Last night we slept around 2(am). He was crying and in pain. At around 4am he was awake again and wanted to go to the bathroom. Just that movement to wake up and go back to bed, he cries,” she said.

According to Rebecca, some nights are worse. To ease the pain, they give him painkillers prescribed by his doctor.

“That is all we can do otherwise much depends on surgery. Without it there is nothing we can do.

“Sometimes he just sleeps for two hours. The moment the painkillers stop working in his body, the pain comes again. His system is used to painkillers and sometimes it even resists them,” she said.

To fight the discomfort, she said, SteveJohn can only sleep on his back, adding that most of the time, it is difficult.

“He cannot do so (sleep)on his side or stomach. When he is tired of sleeping, he just cannot sit for more than five minutes. The side with the tumour has to be on the ground, somewhere flat. The moment it is raised the swelling starts and the pain increases. Sometimes we put a cloth in warm water and pat the swollen part.”

“Sometimes he cries saying he has stomach pains. The cancer has become aggressive. We call the doctors now and then to tell them how he is progressing from what we are seeing.

“The doctor told us ‘this thing is aggressive. The more you delay the more damage it is causing on him.’ There are no two ways about it. It has to be removed as soon as yesterday,” said Rebecca.

As a result of the tumour which continues to grow, SteveJohn, a second year student studying civil engineering at the University of Zimbabwe, was forced to suspend his studies.

“That time it was very small. He did not feel any pain at all back then. However, the tumour started to grow and grow and grow. By last year, he could not do anything with his hand, the tumour was big, but not as big as it is now,” Rebecca recalled.

SteveJohn, being the youngest child in their family, was the only child left at their Unit K, Chitungwiza home.

As such, he would help with fetching water from the community borehole since the town experiences serious water challenges.

At first his family thought carrying water triggered the pain.

“He would say my hand is painful, but we also did not have money to take him for a medical examinations.

“We discovered it was serious and took him to hospital whenever he felt too much pain. He would get injections and we would return home. Doctors performed a biopsy and we were told he should be operated on. That’s when he went to Karanda Mission Hospital,” Rebecca revealed.

When the tumour started growing it affected SteveJohn’s performance at school as he was always in pain.

“He could not walk long distances, the hand muscles would slow him down.

“Last year in August, we ran around looking for money and he was operated on at Karanda Mission Hospital. Two weeks after the operation, the tumour started to grow bigger and bigger. An opening from where the tumour had been cut off progressed into a wound,” revealed Rebecca.

Not knowing what to do, and looking for any possible solution to cure SteveJohn, the family bought a variety of natural herbs they thought would help.

“We wanted to ease the pain. We would go to doctors at Makoni in Chitungwiza and were charged for each visit. They would inject him with pain killers to ease the pain. The pain would return once medication stopped working in his system,” she further explained.

At the start of this year, Rebecca and Alex took SteveJohn to Louis Trichard in Limpopo province, South Africa, where they are based.

“He flew in on January 6 this year and we took him to a general private hospital. The doctor said the wound was cancerous and would not attempt anything.”

She added: “He referred him to Tshilidzini Hospital, one of the best health facilities in Limpopo province. An X-ray was done and the doctor said an orthopaedic would see him. That was that. No one came. Five days later they just called and said they had discharged him and we should take him home.”

She said they kept looking for solutions and found a doctor who is ready to operate on him.

“The doctor said we delayed seeking help. He also said when the tumour was initially removed, it was not completely taken out. The tumour had to be removed from the root but that was not done,” she explained.