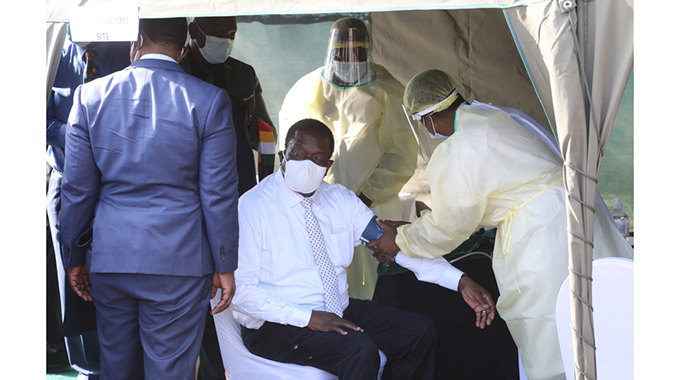 ANXIETY and fear coupled with excitement filled a team of nine health workers as they attended to President Mnangagwa when he got his first Covid-19 vaccine jab at Victoria Falls Hospital on Wednesday.

The process of vaccination starts with sanitisation, screening, registration and then vaccination after which the person goes through the resuscitation process and President Mnangagwa was no exception as he was taken through every stage.

Health authorities at the hospital selected a team that has been actively involved in Covid-19 intervention programmes since last year.

To welcome President Mnangagwa at the vaccination tent were male nurse Mr Vusa Fuzane and Sister Modester Shoko who sanitised him, checked his temperature and blood pressure.

Sr Yvonne January and Mr Mqondisi Sibiya captured his details and literally surprised the President when they asked who his employer was.

Sr Jane Sibanda, who vaccinated President Mnangagwa had Sisters Sizo Ncube, Winnie Mogkohloa and Euthia Sibanda on the vaccination desk while Sr Bulayani Shoko was on the resuscitation corner to monitor the Head of State during the 30 minutes post-dose period.

The team went through rigorous coaching in preparation for the process and said given an opportunity, they would have told the President how excited they were to have attended to him.

They confessed the anxiety and Sr Jane said she feared she would even prickle herself in the process as her hands were shaking.

She needed back-up and Sr Mokgohloa stood by her side closely monitoring and ready to render assistance.

On the other hand, President Mnangagwa remained calm, following every instruction and occasionally cracking jokes with the nurses and sending the whole crowd that included Vice President Costantino Chiwenga and Cabinet Minister into laughter.

VP Chiwenga stood on his right-hand side, occasionally chit-chatting with him, probably to offer morale support and at some point, joked and said “he is Zim 1” while responding to a question from Sr January who had asked for the President’s name for recording purposes.

Mr Fuzane said his memorable moment was when he sanitised the President and standing closer to him during a group photo afterwards.

“I feel honoured because it was my first time to get closer to him especially at such a memorable occasion. I introduced myself after greeting and welcoming him and asked to sanitise him. For a moment I figured what I would do if he refused,” he said.

The moment of brilliance for the whole occasion was probably the interaction between Sr January and the President.

She said she had not imagined she would directly ask him questions.

“I got tense because I thought there was going to be someone answering questions for him. I asked for his full names and he spelt it out for me. When I asked who his employer was, he laughed saying he had not been asked such as question for a long time. People laughed and I felt like I had asked a wrong question but I told myself I was only doing my job.

“Then he responded saying he was employed by Government of Zimbabwe. I had to ask the question because as a health worker you don’t assume things. This information is important because it is part of health education,” she said.

Her colleague on the data capturing desk Mr Sibiya said he feared the President would be impatient because of a lengthy process.

“He was patient, calm, down to earth and in a happy mood despite going through the same process again. He kept cracking jokes and I felt humbled because he would actually lean forward to listen attentively as we spoke to him, something you wouldn’t expect a person of his position to do,” he said.

Sr Jane said she was nervous until Thursday as she feared she might be summoned for wrongly injecting the President.

She said she almost collapsed with fear when her superiors alerted her that she was wanted for an interview.

“His first question after I had explained the process was whether he was eligible for vaccination since he is 78 years and I told him he was. He then told me to add on my CV that I vaccinated the President and at that moment fear gripped me while he just laughed. I laughed too but I was tense,” said Sr Jane.

She said she started shivering when she opened the vaccine boxes to show the President the bottle of his dose.

Sr Jane said she gathered her strength and told herself that she had injected patients before and nothing was unusual.

“I was shivering and tense as I injected him. My eyes were on his face observing facial expressions. He didn’t move or frown. I felt strong because Sr Mogkohloa was there. Her presence closer to me gave me courage. If I was alone, I would have even forgotten to sanitise because of nervousness.

“I pulled out the syringe and pressed hard for some seconds to make sure there was no bleeding. He was calm and relaxed. When I told him that I was done he said, ‘are you done already?’ and joked that I should inject him again and everyone laughed,” narrated Sr Jane.

She said she was curious to monitor him as he walked back to the VIP tent and breathed a sigh of relief when he sat down.

Sr Jane said she even forgot to switch on her phone afterwards as she was still nervous until she got home, and the first picture that popped up was of hers vaccinating the President that had been sent to her on WhatsApp by a relative outside the country.

She phoned her sister Mrs Juliet Sibanda-Rwafa who is a teacher in Bulawayo and told her she had vaccinated the President.

While to some this might appear a non-event, to Sr Jane this was a historic moment, and probably of a lifetime as such an event may not happen again.

“I feel I have achieved something as I have treated my two childhood heroines. When I was growing up, I was charmed by the soft spoken Oppah Muchinguri and Yvonne Vera. They were my heroines. I once attended to Vera when I was still at Mater Dei Hospital and now by coincidence, I have vaccinated Oppah Muchinguri.

“To me this is a fulfilment of my dreams as they were my role models as a young girl,” she said.

Sr Mokgohloa said she struggled to scribble the President’s name on his Covid-19 card because of anxiety but feels greatly honoured to have done it.

“Our prayer was for the process to go well hence the anxiety. I was racing against time as I was the last to write his details on the card and my hand was shaking and almost failed to write. This is the most exciting moment for us as Victoria Falls Hospital. The thought of having my handwriting on his important card makes me feel honoured and I am keeping the pen that I used as a souvenir,” she said.

Sr Ncube who was also on the vaccination desk said: “It was an exhilarating moment which should go down in history books. It was encouraging to attend to a high-profile person who prioritises health and willing to be attended to. This makes our job easier as we feel the Executive value us as nurses.”

Before leaving the vaccination site, the President turned back to the health team and said “munechivindi” (you are brave) and he laughed while being ushered to the VIP seat.