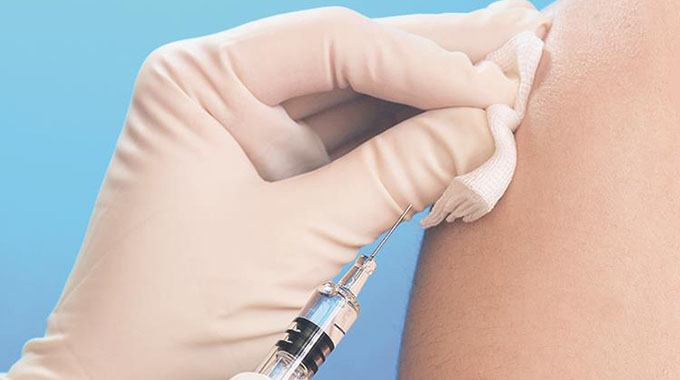 The vaccination roll-out was launched in February with the first large batch of jabs on February 22 targeting frontline health workers and other frontline staff.

The second stage was then rolled out last month to include teachers, security services, judiciary, the clergy and people with chronic illnesses over and above the initial target group of frontline workers.

It took almost six weeks, to Good Friday, to give the first 100 000 their first jab, but the second hundred thousand was expected to be done by last night, just 10 days later.

The target is to buy and use 1 million doses a month, which will mean 500 000 people being vaccinated each month. The daily vaccination rate is now close to what is required to meet that target.

Government has since increased the number of centres offering the vaccination services across the country to ensure all citizens can access the vaccines.

In a tweet yesterday, President Mnangagwa said the vaccination programme was working and urged Zimbabweans who are eligible for the shot to promptly get it. “Zimbabwe’s Covid-19 vaccination is working! Zimbabwe has the 3rd highest rate of vaccinations in SADC and 8th highest in Africa as a share of the population. We cannot lose this momentum. If you are eligible, I urge you all to get your jab,” he said.

The roll-out of the vaccination programme targets 60 percent of the population towards the achievement of herd immunity.

According to the Africa Centre for Disease Control (CDC), Morocco has administered the most Covid-19 vaccine doses on the continent to date at over four million. Nearly 11 percent of that figure has received both doses.

“To date, a total of over 33.8 million vaccine doses have been acquired by (African) states, with approximately 12.9 million doses having been administered. As of today (April 8), 31 states have received their consignment of Covid-19 vaccines from the COVAX facility, resulting in a total of over 16 million (16 662 410), doses received. A total of 31 states have received Covid-19 vaccines outside the COVAX facility through bilateral agreements, resulting in over 14 million (14 047 220) doses received,” the Africa CDC said in its weekly report.

After Morocco, other African countries that have made headway in their vaccination programmes include Malaysia, Rwanda, Senegal, South Africa and Zimbabwe.

Zimbabwe, which is now aiming to procure more vaccines through the Covax facility being coordinated by the World Health Organisation and the global vaccine alliance on behalf of poorer countries, has so far bought 1,2 million doses from China under a US$100 million fund set aside by Treasury to buy Covid-19 vaccines.

Another 400 000 vaccines have been received as a gift from the Chinese Government while 35 000 came from the Indian government.

Finance and Economic Development Minister Professor Mthuli Ncube recently said Zimbabwe would now take delivery of about one million vaccines every month to ensure the targeted herd immunity is achieved. The progress registered in the vaccination drive is expected to help the country reduce the infection rate, which has been rising over the last week.

While the positive cases have been declining, there have been odd outbreaks. The latest is at Sacred Heart Primary and Secondary Schools in Umzingwane District where 221 cases have been confirmed.

That the odd boarding school might have an outbreak was expected, since two saw this in the third term last year, and there is a standard procedure that comes into immediate effect.

Boarders are split into those who test positive or negative and both groups are quarantined along with the school.