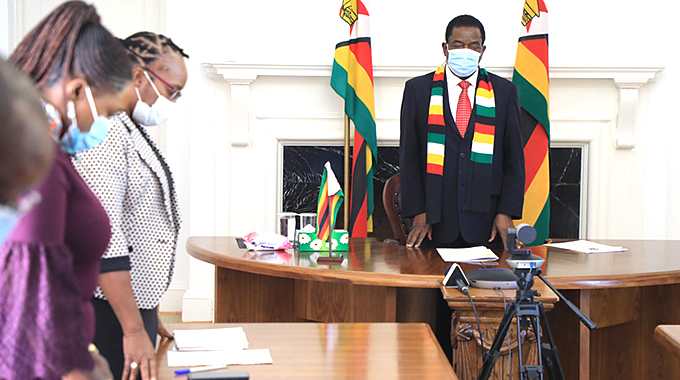 President Mnangagwa and other Political Actors Dialogue members observe a minute of silence in honour of heroes and heroines who succumbed to Covid-19 at a virtual meeting at State House in Harare yesterday. — Picture: Tawanda Mudimu

Farirai Machivenyika
Senior Reporter
GOVERNMENT has completed the Covid-19 roll-out and vaccination framework while resources for the procurement of the drugs have been set aside, President Mnangagwa has said.

In his opening remarks during the first Political Actors Dialogue (Polad) meeting of the year held virtually yesterday, the President reiterated that frontline workers, the elderly and people with underlying medical conditions will be given first priority.

Zimbabwe expects its first batch of Covid-19 vaccinations next week which include a donation of 200 000 jabs from China, a development that would see the vaccination process — which seeks to have 10 million Zimbabweans inoculated to achieve herd immunity — kicking off.

“A Covid-19 vaccination framework has been developed and finalised for the roll-out of the vaccine. As I have previously highlighted, the first phase of vaccination will prioritise frontline workers, the elderly and those with underlying conditions. The vaccine would be free of charge,” he said.

“We are further thankful that the surge of Covid-19 infections and deaths witnessed between mid-December 2020 and January 2021 is beginning to recede. This followed a second wave of infections which was more contagious and fatal.”

The President briefed the leaders on the interventions the Government had undertaken to fight Covid-19, saying the Level 4 lockdown had shown encouraging signs of containing the virus.

“In the coming week, I will be announcing how we are proceeding with regards to the lockdown. This will be informed by scientific data and recommendations from our health experts,” he added.

Turning to other issues, the President welcomed MDC-T’s willingness to engage in dialogue and reiterated Government’s readiness to talk to all political parties.

The new MDC-T president, Mr Douglas Mwonzora, has expressed his party’s willingness to engage, unconditionally, with the Government for the sake of national development.

Mr Mwonzora’s stance is a departure from the confrontational behaviour of the party’s former president, Mr Nelson Chamisa, whose leadership of the party was deemed illegal by the Supreme Court following his violent and unconstitutional takeover after the death of founding leader, Mr Morgan Tsvangirai in 2018.

“On political developments that have occurred since our last meeting, Government is encouraged by the patriotic stance towards constructive dialogue taken by the MDC-T as the official opposition.

“We remain ready to engage with all political parties through the multi-party POLAD forum, for the good of the country,” he said.

He told the political leaders that the socio-economic reforms that have been implemented by Government have brought about new socio-economic opportunities and political realities saying divergent views are healthy to national development.

“However, such differing opinions should never be divisive or against national interest. Neither should these seek to sabotage or make nullity of the collective will of the majority,” President Mnangagwa said.

“As individuals, groupings or organisations, the overarching interest of the people of Zimbabwe, must supersede sectional or personal interest.

“This spirit must cut across all sectors and more importantly in our grassroots population. For it is at that level that a strong, firm, resilient and sustainable national foundation should be anchored”.

On the economic front, the President said the above normal rainfall being received across the country, which has seen some dams filling to capacity, will lead to a bumper harvest.

“Developments in the agriculture sector will have far-reaching implications for increased capacity utilisation in our agro-based manufacturing sector, as well as a reduced cereal import bill. Coupled with the macro-economic stability, we should see a growth in our GDP,” President Mnangagwa said.

He implored political leaders to mobilise people to be productive and work with unity of purpose.

“It is of paramount importance that we maintain the development momentum witnessed since the advent of the Second Republic.

“We cannot afford to be drawn back into an era of moving in circles, often by those with ulterior motives, bent on curtailing our potential,” he said.

He said some of the issues discussed include POLAD’s proposals on the proposed amendments to the Constitution and Electoral Act.

“We said as POLAD the political and electoral reforms must be done way ahead of the next elections,” he said.

On the lockdown, Prof Madhuku said they had proposed that some of the measures be eased to allow some businesses to resume operations.