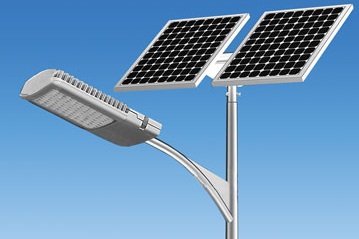 HARARE – Thieves are helping themselves to solar street lights installed along Harare’s Airport Road while others have fallen prone to vandalism despite a decision by Harare City Council to conceal batteries that were previously being targeted, the Daily News can report.

The thieves are targeting solar panels adjacent to a bushy area opposite One Commando Barracks where more than five panels have been cut off their poles.

Several others were also stolen towards Robert Mugabe International Airport while a few more were simply felled but the solar panels are still intact.

Harare City Council mayor Herbert Gomba could not say whether the city fathers were aware of the development as he referred questions to the city director of works Zvenyika Chawatama.

However, Chawatama was not immediately available for comment as his mobile phone was unreachable.

The Daily News crew nevertheless observed that the thieves are stealing the panels and removing solar batteries that are hidden underground possibly for resale to unsuspecting buyers.

The solar street lighting project was supposed to be implemented in two phases that would have seen the second phase incorporating areas outside the city.

This is not the first time the lights have either been vandalised or stolen as council spokesperson Michael Chideme revealed last year that council had lost 52 batteries from theft.

This he said had prompted the local authority to remove all 588 solar light batteries along Airport Road as means to protect them.

Chideme said: “We were drawn back by theft, which is why we removed all the batteries from the solar street lights along the Airport Road. We can now safely say we have reconstructed battery boxes to ensure the batteries are safe and secure from thieves and vandals.”

The initiative to deploy solar power as a source of street lighting was expected to reduce the local authority’s electricity bill.

Government is currently considering formulating a legislative framework that outlaws the use of electric geysers in households and institutional buildings, as it urges citizens to embrace solar thermal technologies.