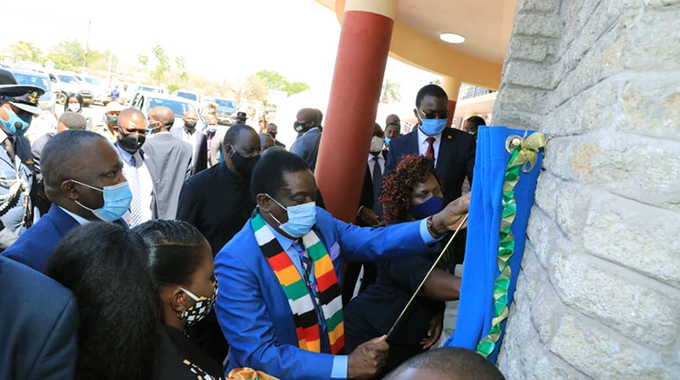 From George Maponga  in Masvingo
Zimbabwe’s universities must consolidate modernisation and industrialisation agendas in line with Vision 2030 and use their innovation hubs and industrial parks to produce goods and services that impact on all sectors of the national economy, President Mnangagwa said yesterday.

Speaking after Great Zimbabwe University (GZU)’s 14th graduation ceremony held virtually in line with Covid-19 regulations, the President said universities should be nerve centres of the drive to accelerate modernisation and industrialisation through coming up with inventions and solutions to challenges afflicting the country.

Already, GZU is at the forefront.

The President commissioned a $10 million textile factory at GZU Industrial Park Complex in the Masvingo Industrial area. This park is also booked for a food preservation factory and a science innovation factory that will include a bottling plant and a sanitiser-manufacturing plant.

GZU’s textile factory has been central in the manufacturing of personal protective equipment (PPE) for health workers in the province and face masks for ordinary people in the battle against Covid-19.

Prior to the virtual graduation ceremony and opening of the factory, the President, who is GZU Chancellor, had commissioned the Robert Mugabe School of Education nearby, which was built under the university’s multi-campus system and named after former President Robert Mugabe in recognition of his leading role in the development of education in post-independent Zimbabwe.

President Mnangagwa said institutions of higher learning should always focus on registration of patents, research output, development of prototypes and continuous development of appropriate products. “Under Education 5.0, we

must not look at those outside as our saviour. Innovations, inventions and solutions which accelerate the modernisation, industrialisation and development of robust rural industry systems must come from among us. In this regard the centrality of local institutions of higher learning cannot be over-emphasised,” said President Mnangagwa.

He underscored the crucial role to be played by institutions of higher learning as centres of solutions to challenges threatening the Second Republic’s industrialisation and modernisation agenda.

“Construction of innovation hubs and industrial parks are not the ultimate end. The main interest of my Government is in the products and services that must be churned out of these facilities impacting on every sector of our economy.”

The President urged GZU and other universities to register their patents, taking a leaf from the University of Zimbabwe which was leading in that regard.

He also challenged local institutions of higher learning to draw a lesson from the GZU which has immortalised local and regional luminaries in the struggle for self rule by naming schools and theatres after them.

“This warm gesture immortalised their contribution to the liberation struggle and independence of our region and nation.

“The ideological ethos, culture and values which they bequeathed to us; that independence without economic emancipation is empty. What must inspire and guide present and future generations is to leapfrog our economic, scientific and technological development,” said the President.

He commended GZU for being the first local university to have an on-campus radio station.

The President challenged the local media, both private and public, to promote national unity, love and honest hard work for the good of the country.

In his address Higher and Tertiary Education, Innovation, Science and Technology Development Minister Professor Amon Murwira underscored the importance of Education 5.0, saying it would give impetus to the national drive towards Vision 2030.

Institutions of higher learning were at the centre of the country’s modernisation agenda and industries did not “fall from the sky” but needed people with skills to develop them.

Masvingo Minister of State for Provincial Affairs and Devolution Ezra Chadzamira paid tribute to GZU and Vice Chancellor Professor Rungano Zvobgo for creativity and projects like sanitisers production and the Campus Radio among others.

This had positively impacted on the province’s economy especially under Covid-19.

The opening of the textile factory by the university, he said, would go a long way in easing shortages of personal protective equipment especially amongst frontline health workers in the Covid-19 fight.

Professor Zvobgo said besides being a laboratory for students to learn practically, the industrial park complex would also be a commercial wing of the university to generate revenue to augment its working capital.

He singled out the Campus Radio as one of the institution’s strategic business units that was already making a huge impact in society.

Earlier on in his welcome remarks before the graduation ceremony, Professor Zvobgo had highlighted a number of milestones made by his institution in the fight against Covid-19.

GZU had manufactured more than 40 000 litres of hand sanitiser, made face masks and used the Campus Radio to promote virtual learning. The radio was now accessible in Masvingo, Mashava and Chiredzi where the university had campuses.

GZU was in the process of setting up a centre for research in dryland agriculture in the semi-arid Chivi district while the institution’s medical school was under construction with a lot of ground having been covered.

A total of 4 779 students were capped but only 116 were physically present with the rest graduating virtually because of Covid-19 precautions.

Those who were physically present excelled in their studies with distinctions and received awards. Among them was Chief Mugabe, Mr Matubede Mudavanhu, who graduated with a Bachelor’s Degree (Honours) in Archeology, Museums and Heritage Studies. He won a university book prize and is a beneficiary of the Vice Chancellor’s Scholarship.