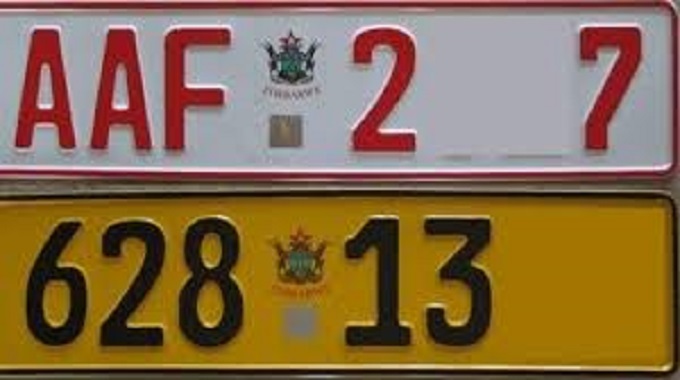 Nkosilathi Sibanda, Sunday News Correspondent
DELAYS in the issuance of vehicle number plates have raised disgruntlement among affected motorists in Bulawayo who are accusing the police of harassing them yet the Central Vehicle Registry (CVR) is yet to distribute the plates to its offices in the city.

Bulawayo police acting spokesperson Assistant Inspector Nomalanga Msebele, however, said police were not only arresting motorists whose vehicles did not have number plates as required by the law, but also dealing with crime syndicates that were using unmarked cars to commit crime.

Motorists, in a series of interviews, said they have followed the due processes to acquire the number plates but they were major delays from the CVR. A motorist who was waiting for service at Customs House in the Central Business District yesterday said apart from an e-mail acknowledging receipt of the application nothing has been processed.

“I have been here several times and they tell me there are no number plates. It is surprising really. After submitting everything on my e-mail, they respond at their own time,” said Mr Silas Ncube.

Mr Ncube said he was approached by police while parked at a shopping mall in Bradfield, who asked why his car had no number plates.

“I showed the police the temporary number plates, even to the extent of giving them a glimpse of the e-mail account with details of my vehicle that I sent to CVR for number plates.”

Some motorists said they would prefer going to Harare to process the number plates.

“It is best we go to Harare. That side there is no confusion,” said Mr Simon Malunga who said he has been waiting for number plates for “ages.”

“It has been ages. I bought my Honda Civic in January and up to now nothing has come out.”
On Tuesday last week, the Government announced that car number plates will now be manufactured locally as a way of expediting the process and save on imports. Cabinet approved a US$1 million budget for the establishment of the number plate plant. Once localised, number plate production was expected to be less expensive.

Repeated calls to the CVR, which is in charge of number plates did not yield any luck. However, an official at the organisation’s Bulawayo office said the number plates were being processed in Harare.

“It is a very tense situation here because we are overwhelmed with work. While we can respond to all queries and attend to serving our clients, we appeal for calm. At times decisions are made at head office and with the pressure we have, it is hard to attend to everyone,” said the official.