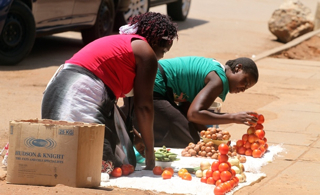 HARARE – Vendors at the congested Copacabana termini in Harare arrived early in the morning on Saturday to find their market stalls destroyed with only heaps of rubble left.

The demolishment was carried out during the night without their knowledge as everyone had vacated the place.

The demolitions are not entirely new in Harare’s Central Business District as they were once carried out during the Robert Mugabe era although the vendors trooped back after the military intervention last year.

Vendors Initiative for Social and Economic Transformation (Viset) director Samuel Wadzai said they were worried with the timing of the demolitions which came just after the elections.

Wadzai said even more worrisome is the time the demolitions were made as it all happened at night when the informal traders had gone home.

“Everything around this is questionable. If they wanted the exercise to be transparent, they should have done it when the traders were present.

“This was a direct attack on people’s livelihoods because now they have nowhere to ply their trade.

“They should have engaged the traders before making arbitrary decisions. Even if we want to raise concerns, we do not know where to go or which ministry was in charge of what happened,” he said.

National Vendors Union of Zimbabwe (Navuz) chairperson Sten Zvorwadza said they would engage government so it mitigates the livelihoods of the affected vendors.

Zvorwadza said as Navuz, they would follow the trajectory outlined by government as it would be in the best interests of the people.

“While our position still remains the same that we will put the vendor first, it was brought to my attention that the demolitions occurred because the area had become a security threat.

“Now if that was the case, it was best for us to follow behind government.

“It would not be in the best interest to continue at a place that has people who would harbour ills on the general public. If the place were to burn — a lot of damage and loss of lives would occur,” Zvorwadza said.

A council employee who refused to be named said Harare City Council was not involved in the demolitions but were only called in to remove the garbage afterwards.

“The operation did not involve council. The employees seen at the demolition site were called in to clean-up the mess left behind,” the employee said.

However, at a Zanu PF Harare province meeting war veterans’ secretary-general Victor Matemadanda threatened to look into the vendors’ issue, accusing them of going against the political party.

“We understand that they (vendors) were part of the crowd that was throwing stones and vandalising property during last week’s protests. We will look into the matter,” he said.

Previously, government has conducted such crackdowns on vendors but with no success, as the informal traders continuously go back onto the streets.

With an unemployment rate of more than 80 percent, many Zimbabweans survive on vending for a living.