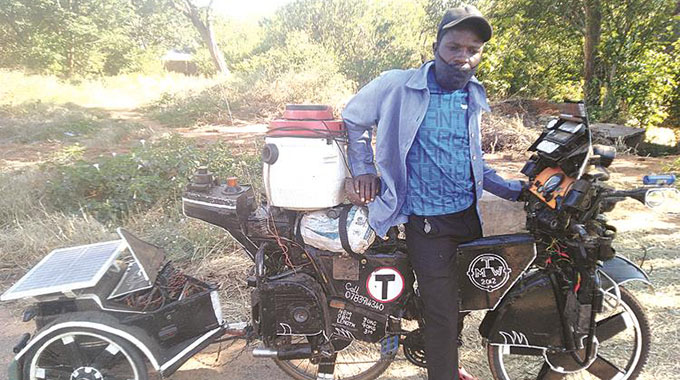 Mr Gurajena (32) says even women take him for granted and that explains why he is not yet married. Neither does he have a girlfriend as all women believe he is mentally challenged.

He was born in Zimuto, Masvingo, where he attended Mavhiringidze Secondary before moving to Rwizi Secondary in Mhondoro.

Mr Gurajena dropped out of school after failing to raise examination fees and then relocated to Victoria Falls in 2009 to join his mother and siblings who had also moved to the resort town.

His “Mazda Two Wheeler” bicycle is popular in Victoria Falls but few have given attention to it as people generally believe he is not mentally stable.

However, Mr Gurajena could be a genius lacking support to realise his dream of becoming an auto electrician.

The bike has a full dashboard resembling that of a vehicle and is fitted with an auto electric box, indicators, low and high beam lights, park lights, blue traffic lights and siren, anti-theft mode, reverse buzzer, reverse lights, rev counter, radio and speakers, a solar panel, battery and battery gauge, among other unique features.

During the day, one is attracted to it by the sound of music and at night the numerous lights that sometimes beat those of some roadworthy vehicles herald the passing of the semi-vehicle.

Mr Gurajena said he uses motorcade lights to bulldoze his way at night if he feels motorists or pedestrians are blocking him.

The trailer whose roof is a solar panel is fitted with safety chains.

He says his idea is to showcase the bicycle at the impending Zimbabwe International Trade Fair.

He decided to modify his bicycle because he was concerned about the way motorists were treating pedestrians on the country’s roads hence he wanted to be respected as a road user.

“My mother was working as a domestic worker when I joined her in Victoria Falls in 2009. I got a job at a car wash and later on I started doing my own side cleaning services where I would get clients and go to them to clean their premises or vehicles.

“I was not happy with the way motorists were treating pedestrians and cyclists on the roads where they were hooting and flashing lights unnecessarily and sometimes splashing mud on other road users. This made me want to challenge them and I bought an ordinary bicycle which I fitted with a hooter so that I could as well hoot back and get respect as  a road user,” said Mr Gurajena.

“I have a friend Simbisani Mudimba and we had similar bicycles which we would use to cycle around together. We only stopped when he got married and he now has a car. Our intention was to showcase the bikes at ZITF and I specifically wanted to show people that I could be an auto electrician. I wish I had Ordinary Level education so that I could get formal training,” he said.

The bike is more than two meters long and weighs about 90kg.

Mr Gurajena has big plans to make a ‘four wheeler’ which will be fitted with a solar roof for use as a tourism vehicle to carry tourists on guided tours.

“I do mobile dry and wet cleaning where I clean sofas, carpets, beds and cars and use the bicycle to carry equipment when going to work. I fitted it with a trailer to be able to carry my equipment.

“I could have fitted a fuel tank but I am not sure if I will be allowed to do so,” he said. I am planning to make a four wheeler which I want to call Mak4 once I get money. It will be like a game drive vehicle, with four wheels with a roof made of solar panels. I don’t have money for now and wish I could get a financial partner,” he said.

He picks some of the fittings from dump sites and also buys some from shops and car breakers.

Despite all this, many people (especially women), don’t take him seriously.

“Women don’t take me seriously and turn me down because they believe I am insane. I am not married yet neither do I have a girlfriend because everyone doesn’t want me,” said Mr Gurajena

Mr Gurajena is however popular with the white community who are his main clients in the mobile car wash business. Seeing the potential in Mr Gurajena, Ms Suzanne Smith shot a video of him and the bicycle and circulated it on social media to show the community that he was sane.

“He is a hard worker and an amazing car cleaner who takes his time to clean a vehicle,” said Ms Smith.