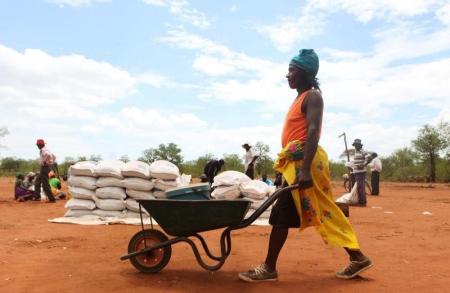 ZPP said over the years, it has documented numerous cases of destitute and marginalised citizens being unlawfully denied social welfare assistance, solely on the basis of their political allegiance.

The human rights watch dog said section 77(b) of the Constitution Amendment (No 20) states that every person has the right to sufficient food, with the State having theresponsibility of ensuring that reasonable legislative and other measures are taken to realise this right.

“State efforts to ensure that marginalised, destitute citizens also enjoy this right, particularly during difficult or drought seasons, include the Presidential and Vulnerable Input Scheme; and the Food Deficit Mitigation Strategy,” ZPP said.

“These measures were put in place for the elderly, persons with disability and child-headed families to receive assistance in the form of either farming inputs, or food aid through the Ministry of Public Service, Labour and Social Welfare. The distribution of this assistance is where the discrimination occurs, as the inputs and food aid is channeled through local, traditional structures.”

“According to the ZimVAC [Zimbabwe Vulnerability Assessment Committee] 2019 report, 51,4% of the population is food insecure; meaning that the greater part of the Zimbabwean population lack reliable access to a sufficient quantity of affordable, nutritious food. The food insecurity of the majority of the Zimbabwean population is exacerbated by the blatant partisan distribution of food aid to already vulnerable groups,” ZPP reported.

“Many of the victims documented during this period are persons with disability and the elderly, who are not able to go and work or produce food for themselves in the current harsh economic environment.”

ZPP said from January to May it documented and reported violations of the right to food and other second generation rights such as the right to education and healthcare.

“A total of 87 food and other aid-related human rights violations were documented for this period. Mashonaland Central recorded the highest violations with 24, followed by Manicaland (14), Mashonaland East (13), Mashonaland West (12) and Masvingo with 11,” the ZPP report read.

The findings show that Mt Darwin topped in the violations, followed by Buhera, Chimanimani and Zaka.

The organisation urged traditional leaders to acquaint themselves with the Constitution and comply with the law and human rights.

“They [traditional leaders] are to promote and uphold the cultural values in their communities and not violate the fundamental rights and freedoms of any person,” ZPP indicated.

“ZPP calls on local councilors to carry out their civic duties in a non-partisan manner because they were elected to represent a ward made up of citizens with different political views; they were not elected to oversee the welfare of citizens aligned to their political party alone.”