A 37-YEAR-OLD 1 Commando Regiment-based soldier was on Thursday night killed by three minors after he allegedly attacked their mother over suspected arson at his parents’ home in Zaka, Masvingo province. 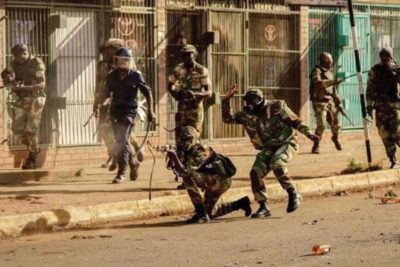 “We are investigating what really transpired,” Nyathi said.
But a leaked police memo indicated that the soldier travelled from Harare to Zaka on Wednesday on a revenge mission after his parents’ hut was allegedly set on fire by the minor children’s father over a debt.

Bhasopayi arrived at the accused person’s home at around 10pm, forced himself into the accused’s room and woke them up before going to their mother’s bedroom, where he stabbed her with a knife, accusing her husband of torching his parents’ hut.

The trio’s mother cried for help and on realising their mother was in danger, the 15-year-old accused person grabbed Bhasopayi from the back and the other two accused persons started to assault the soldier using logs.

It is alleged the accused persons took an axe which was in the room and struck Bhasopayi several times on the head until he collapsed.

The accused persons left him unconscious and alerted neighbours and police.

The police officers attended the scene and found Bhasopayi’s body lying in a pool of blood.
The police searched the body and recovered a Zimbabwe National Army identity card, three blue tablets, cigarettes and loose dagga.

The body was taken to Masvingo General Hospital for post-mortem while the accused’s mother was referred to Ndanga District Hospital for medical attention.

The matter is being investigated under ZRP Zaka CR117/10/20.
lFollow Desmond on Twitter
@DChingarande1