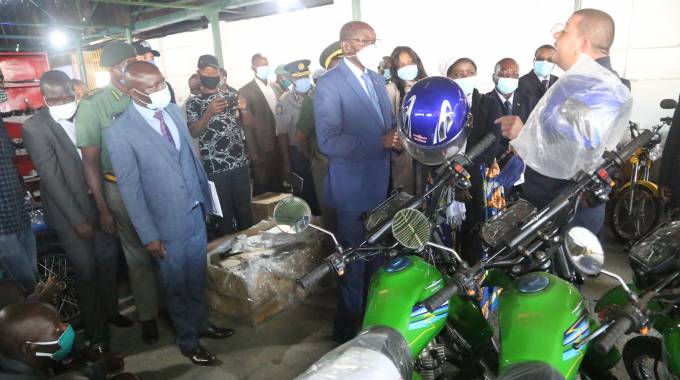 The project has the capacity to produce 10 motorcycles a day.

Speaking at the launch of the joint venture in Harare on Friday, Vice President Mohadi praised Gelles Motor Cycles for embracing innovative and creative ways to operate in the wake of Covid-19.

“It is in this light that Gelles Motor Cycles in collaboration with the ZPCS defied the setback and jointly originated the correctional industry.

“This was done deliberately and in good spirit to continue promoting and investing in local production of motorbikes,” he said.

“Congratulations for such a positive venture. You have taken the bull by the horns and refused to cry about the difficulties we face and instead focus on solutions.”

The venture, Vice President Mohadi said, is likely to provide the country with alternative sources of transport.

“I am reliably informed that the bikes are quite durable and user-friendly, and are also semi off-road. (They are) quite conservative in terms of fuel consumption.”

He encouraged Gelles Motor Cycles and ZPCS to expand the project to prisons in all the country’s 10 provinces.

The joint venture is in sync with ZPCS mandate to rehabilitate prisoners, as 15 inmates are already working on the project.

“Government has taken a conscious decision to support the country’s automotive sector as it is very important for the country and for the economy.

“Your plan to second interested inmates during their tenure to the training programme is greatly appreciated.

“It will equip these inmates with the requisite skills and knowledge that should ultimately transform them into entrepreneurs.

“In this respect, this correctional industry should be cascaded down to all the ZPCS’ administrative provinces.”