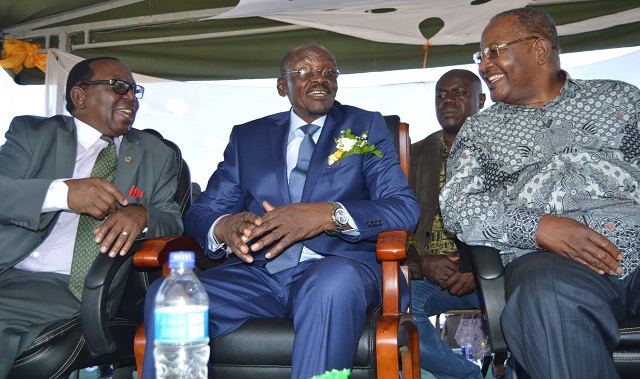 Speaking during a party to celebrate his elevation to become one of the country’s Vice-Presidents in Gwanda, Cde Mohadi called on people to take advantage of his upcoming meetings with traditional and community leaders to speak frankly and from the heart so that the nation moves forward as a unified force.

VP Mohadi, who is also responsible for the National Peace and Reconciliation portfolio, said there was a need for Zimbabweans to sit down, engage constructively and find each other.

“If we still don’t cherish the fact that we should be united then it is time that we stop where we are, reflect, and introspect ourselves because we might not be worthy our salt-in the eyes of the next generation. There is none here on earth that has never wronged the other. We all have but have forgiven each other. In Ndebele the saying ukukhumelana umlotha is as old as humanity but what makes it difficult then to do so today,” said the Vice- President.

He said the nation was bound together by the two sacred creed of the national anthem and flag which were achieved by the blood that was lost during the struggle for independence hence there was a need for the nation to respect this sacrifice.

“Under our national flag we are united by the blood which spilt in the quest to liberate this country. We are united by the green resources which we share together. We are equally united by the minerals which our country is endowed with and share them incognisant of tribe. These cardinal colours unite the black nation of Zimbabwe and not its tribes, we are Zimbabweans first.

“We are also united under our national anthem which calls upon the creator to bless this country bequeathed us by those who came before us. It is only when there is peace, love and unity that we can foster development. The time is now that we should all put our shoulders on the wheel and move forward. We must unite in our cultural diversity, we must unite as a people and for prosperity,” said VP Mohadi.

He further called on the nation to support the new Government led by President Emmerson Mnangagwa saying with the necessary support the pride of the nation could be restored.

“Ours is a new administration which believes in servant leadership. We are here to serve you as your servants, not as your rulers. We are not different from you, therefore feel free to come see us anytime to tell us what you want us to do. This is an assignment bestowed on us and I believe together we can do it.

“His Excellency the President, Head of State and Commander in Chief of the Zimbabwe Defence Forces, Cde Emmerson Mnangagwa articulated his vision at his inauguration and laid down the road map on how he would want it realised or achieved. It is therefore incumbent upon us to walk this road together to attain that objective,” said VP Mohadi.

Speaking at the same event Minister of State for Matabeleland South Provincial Affairs, Cde Abednico Ncube hailed the elevation of Cde Mohadi saying this was a blessing to both the province and the nation.

“Honourable Mohadi has a long proven history in the party and the nation. I wish to reiterate his commitment to developmental issues. He is a leader who has shown his dedication to the betterment of the country by putting his life on the line during the liberation of this country. As we celebrate this new era let us take time to remind ourselves of the great work that lies ahead. I call upon all of us to be united and work hard for a greater and prosperous Zimbabwe,” said Cde Ncube.