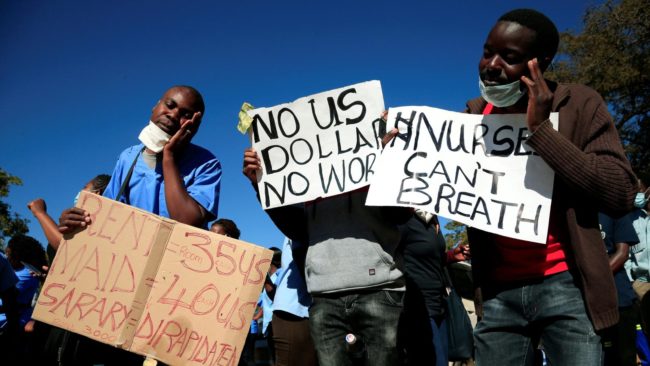 THE 2021 wage negotiations across various sectors of the economy have been characterised by deadlocks and delays amid revelations that some employers have maintained a minimum wage of ZW$2 500 (US$30) that was imposed by the government in 2020.

This comes at a time when prices of basic commodities have skyrocketed worsened by a wave of increases in tariffs by the government. Inflation for January shot to just over 360%.

“It’s a gloomy picture. It’s not a good situation at all,” Moyo said.

“We still have sectors whose minimum wage is still at ZW$2 500 a month which was imposed by the government at the Tripartite Negotiating Forum (TNF) last year after we had failed to agree. They have not managed to move from that figure since then.”

He said the wage negotiation process within the various NECs has been “littered with deadlocks” as employers and workers tussle in vain to find an agreement to the adjustment of the minimum wage.

“Banking sector negotiations have deadlocked. The current minimum is ZW$5 800 (US$70) for the lowest paid. We also used to negotiate annually,” Zibawu said in its submission to Moyo.

Zibawu said employers were offering a 348% inflation-linked adjustment that would see the lowest paid earning ZW$26 000 (USD$313) that has been turned down.

“We are likely to go for arbitration or strike,” Zibawu told Moyo.

“Zimbabwe Catering and Hotel Workers Union minimum wage is ZW$8 200 (US$99) and this includes transport and housing. We are negotiating quarterly. We have submitted our position paper for negotiations and the effective date is February 1,” the workers’ union noted in its submissions.

“We are demanding salaries in USD. In October 2020 we also submitted a position paper demanding Covid-19 allowances. The employers are adamant. They refuse to negotiate.”

Moyo said the Covid-19 lockdowns had also impeded wage negotiations in some sectors.

The Covid-19 pandemic is wreaking havoc, having to date claimed more than 1 350 lives since the first case was reported in March 2020.

“Meetings over wages by some NECs have been delayed due to the lockdown. Whenever meetings are set some of those who are supposed to negotiate do not pitch up due to lockdown complications. This means that meetings are continuously aborted,” he said.

He said attempts to hold virtual meetings to fast track negotiations have in some instances been bogged down by network problems and the failure by some of the negotiators to afford data for virtual meetings.

The post Wage negotiations littered with deadlocks appeared first on The Zimbabwe Independent.