A GROUP of 20 former freedom fighters calling themselves the War Veterans Welfare Committee yesterday stormed President Emmerson Mnangagwa’s Munhumutapa office to hand over a 10-page petition demanding that he arrests “criminals around him”. 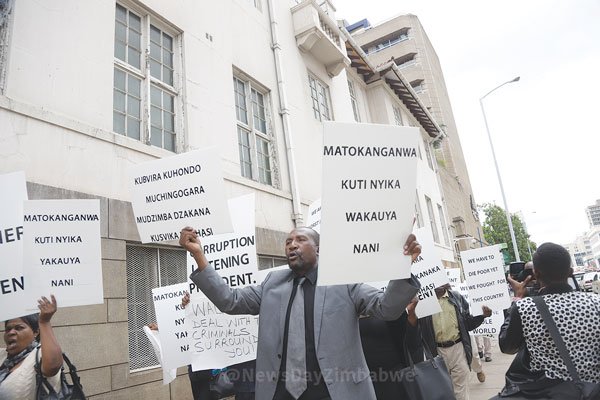 The war veterans, fronted by one Fredrick Ngombe, also want Mnangagwa to honour a pledge by former President Robert Mugabe in 1998 to pay them a monthly pension.

They however, failed to meet Mnangagwa, who was chairing a Cabinet meeting.

“We would have wanted to meet the President, but we have been advised that he is in a Cabinet meeting. Officials have signed our petition and we now await the response from the President,” Ngombe told journalists.

In the petition, the war veterans said they remained saddened by the fact that at independence “sell-outs” were being honoured, while real fighters were sidelined by Mugabe’s government.

“We stand today owed huge arrears in granted life-long Z$2 000 monthly pensions as against the paltry $234 monthly the State is unashamedly paying us,” said the veterans in the statement, adding that they were dismayed that the State was portraying them in “negative national perception to our deserved and lawful entitlements as tantamount to us being responsible for and holding the nation to ransom.”

The war veterans want Mnangagwa’s government to honour Mugabe’s promise to pay them a whopping $450 000 lump-sum “agreed in 1997 between him and our (late) leader Chenjerai Hunzvi”.

“Positively resolve the issue of ex-Zipra properties officially claimed to have been expropriated by government, account for the 25% shareholding for war veterans in Telecel (Pvt) Ltd to date, and hand over responsibility for its monitoring and performance to war veterans themselves and establish a database to account for every war veteran,” the petition read.

Zipra, the wartime armed wing of PF Zapu, had its properties expropriated by government at the height of post-independence tensions that culminated in the 1987 Unity Accord between the two major liberation movements.

The former fighters also want to be paid their outstanding pensions, back-dated to 1997 and “announce and gazette a policy declaration that every war veteran is a national hero or heroine, living or dead. We fought for Zimbabwe in total, not its districts or provinces”.

Some of the veterans who were waiting for their leaders outside the President’s office lashed out at the Zimbabwe National Liberation War Veterans’ Association secretary-general Victor Matemadanda.

“We have been described as renegades by Matemadanda. It is wrong for someone with questionable war credentials to throw pot-shots at us,” a veteran who declined identification said.

“We suffered during the war, and it is not like we are making demands that are out of this world. We were promised under Statutory Instrument 180-181 of 1997 to get Z$2 000 each month and this was only paid once in the last 21 years.

“We want government to honour that. We are not fighting the President, the party (Zanu PF) or the government. Some people like Matemadanda want the world to believe that we are hot-heads; it is wrong.”

Matemadanda was not immediately available for comment, as his aide said he was attending a funeral of Hunzvi’s wife.

Hunzvi arm-twisted Mugabe into paying an unbudgeted Z$50 000 each to thousands of war veterans in November 1997, a move that economic commentators said was behind the downfall of the local currency.