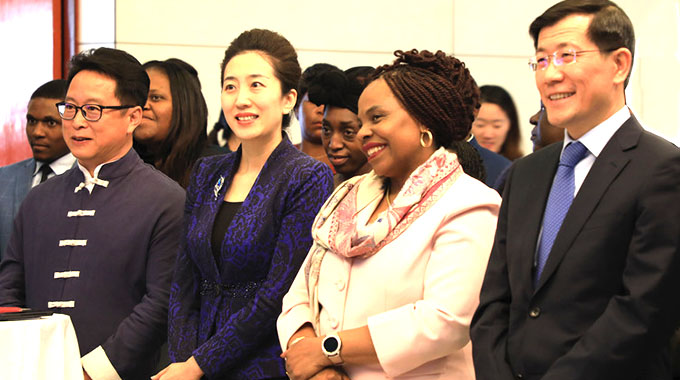 Tendai Rupapa Senior Reporter
China’s relationship with African countries is based on respect for the continent’s sovereignty and non-interference in their internal affairs, Chinese ambassador to Zimbabwe Mr Guo Shaochun has said.

Ambassador Guo said this during a send-off ceremony of 37 Zimbabwean students going to study in China under a scholarship programme provided by the Chinese Government.

“Like many African countries, China has had the bitter experience of having its economy controlled by foreign powers and being subject to unjust treatment, exploitation and oppression.

“Therefore, China-Africa relationship is deeply rooted in our common quest for liberation, justice and independence. We apply a five-‘no’-approach to China-Africa cooperation that is: no interference in African countries’ pursuit of development paths that fit their national conditions; no interference in African countries’ internal affairs; no imposition of our will on African countries; no attachment of political strings to our assistance to Africa; and no seeking of selfish political gains in investment and financing cooperation with Africa.

“That’s the difference between China and those countries that like to impose their values on other sovereign countries.”

He also called on the students to work hard during their period of study as they have an important role to play in the country’s future.

“When I look at you, I see leaders in the making. You have an important role to play in shaping Zimbabwe’s future. You are also going to be pillars of your own families.

“I have only one requirement for you, that is to remember this is a precious opportunity not available to anyone. Zimbabwean students are known for their hard work, commitment and focus. I believe you will maintain that reputation,” Ambassador Guo said.

He added that the growing China-Zimbabwe cooperation was a reflection of the overall relationship between the two countries in various fields.

In her address, Minister Mutsvangwa told the students that they had a lot to learn in China.

“I was in China from 2002-2007 and I must tell you, there are great things happening in that country. There is a lot which you can learn and bring it back to this country. I am grateful to the Government of China for availing this opportunity to our children. We should also commend them for identifying talent in our children through their Dreamstar programme,” she said.

The minister added that China had stood with Zimbabwe from the pre-independence era up to present day.

“China is the workshop of the world, do not listen to those who may want Zimbabweans to continue thinking that they need to go through Europe to get what is being produced in China,” Minister Mutsvangwa said.

“Let us go there (China) and learn, the two Governments have a wonderful relationship. China has always been there for Zimbabwe. The relationship dates back to the liberation struggle. They have always looked at Zimbabwe as people who should free themselves. They respect sovereignty of this country, they respect us as a people, they are there to make sure we achieve the best and get where we should be as a country.”

She also called on the students to embrace the Chinese culture during their study period.

“When you go there, learn a lot and embrace culture, the Chinese maintain their culture.

“When you go there, bring back what can take Zimbabwe to be a middle income economy by 2030,” she said.