We can all dream 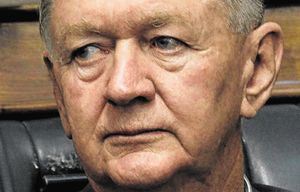 Source: We can all dream | Daily News

HARARE – It is now 26 days to “D” Day — the day of democracy, when we all go to a polling station and at the cost of about $50 each (the cost of an election in Zimbabwe) we are asked to appoint our next batch of 2 500 leaders.

We start with the president, then our local representative in the House of Assembly, then our  councillor on the local authority. This is serious business, we have to evaluate each candidate and make a choice.

They are all important to us individually and collectively — the president because he is the captain of the ship and gives us direction and control over the crew.

The Members of Parliament because they oversee the captain and his executive officers, the local authority because they control the basic services that make our daily lives bearable — transport, roads, health, education, water, sanitation, waste collection, housing — this list goes on and on.

They are all important and deserve close attention. Our vote matters — everyone and each of us has the same say — millionaires and paupers, male and female, black white, pink and brown. It will be a public holiday and I think we should all go out and party — it’s “our day” in the sun — make it count!!

In my next four letters I am going to dream about the day after the election and what might be possible. It is a long time since we were able to dream of what things could be — during the dying days of the Smith regime, I thought they would never get together and settle our differences, I thought that they would fight on and destroy the country completely — in fact I knew that Mr Mugabe and Mr Smith wanted to fight to the finish — both thought they could win — I knew it was a zero sum game for all of us. We were rescued from our own stupidity by the international community working together and a brilliant American Secretary of State who knew what had to be done and had the power to do the job.

In November last year, the army stepped into the ring and in a brilliant and swift action, and without firing a shot, forced a 93-year-old who was long past his sell by date, to go into retirement with dignity and replaced him with a leadership that is now trying to put things right.

In a way it parallels what the Red Army did in China when Mau died — they stepped into the ring, maintained stability and installed leadership that they thought might usher in a new day for China — they were right and look at the result.

Now to dream. In my last letter I summarised the long list of all that has to be done to get Zimbabwe working.

It’s easy to pontificate on such issues — where are the solutions? The top of my “to do” list was the fiscal deficit. In 2017 it stood at $2,5 billion in a $6 billion budget or 40 percent of all State expenditure.

The result is an accumulation of debt behind the walls of the reserve bank which now threatens to burst and flood the country with inflation. Already we are paying 25 percent more for local goods and 100 percent more for imports than we were paying a short while ago.

The one thing I recognise is that we cannot raise taxes — Zimbabweans in the formal economy are already among the most taxed community in the world. Do you know that the American revolt against Britain was over a 5 percent tax on tea, that should make Zimbabweans laugh.

If that is the case, then where do we get the money from? The Speaker of the House of Assembly Jacob Mudenda said to us in the Finance Committee that we need to dream about a $10 billion budget. With revenues stuck at $4 billion or less for the past 5 years.

So what do we do? We change the tax system to widen the net and reduce the rates. My own solution is to tax the electronic transfer system.

In 2017 $100 billion went through all the different forms of electronic payment — cards, EcoCash, RTGS and ATMs. If we imposed a 5 percent tax on every form of electronic transfers, it would raise $5 billion. It would be easy to collect — on a daily basis every financial institution would collect the tax and remit it to Zimra electronically — no accounts, no paper work, no penalties (unless an institution tried to buck the system in which case they would lose their licence to operate and be closed down — immediately).

Concurrently I would reduce formal sector taxes — keep VAT at 15 percent, reduce PAYE by raising the tax free income to $1 000 a month and moderating taxes above that level — maybe a flat tax of 15 percent. Then I would reduce corporate taxes on profits to (say) 15 percent as well and eliminate all other levies on salaries — put the Standards Association on a budget funded by the State and clients, Nssa and the Nec charges to be consolidated into a single charge for an industry related pension scheme, force all existing pension schemes into the same system as a source of additional funds for pensions.  Sum up all those interventions, they will come up to Mudenda’s figure of 10 billion a year.