Wetlands: Constructing ourselves out of water

Source: Wetlands: Constructing ourselves out of water | Herald (Opinion) 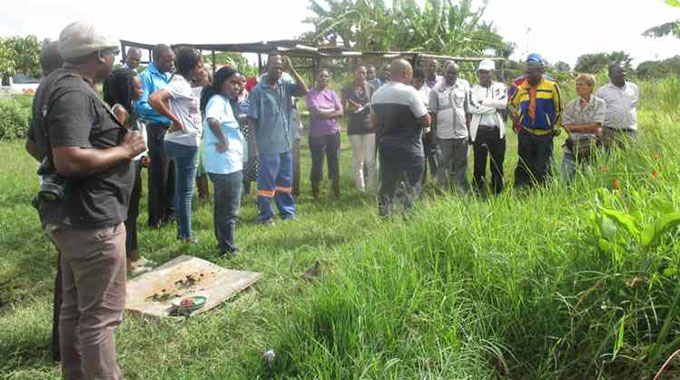 The continued development of residential stands on wetlands has contributed immensely to the water crisis in Harare. It is believed that 90 percent of the city is built on wetlands, and parts of Borrowdale, Marlborough, Bluffhill, Monavale, Chishawasha Hills, Mabvuku, Tafara and Rugare among other suburbs in low and high-density areas are built on them.

Wetlands play a critical role of storing, filtering clean fresh water into the main streams, which flow into Lake Chivero, the city’s main source of water.

Wetlands are areas where water covers the soil, or is present, either at or near the surface of the soil all year or for varying periods of time during the year, including during the rainy season.

They occur where the water table is at or near the surface, or where the land is covered by water.

They play a critical role of water filtration and feed into rivers and dams which provide water to residents, and if development on wetlands continues there will be an obstruction in the smooth flowing and filtration of water resulting in some water reservoirs not receiving adequate water.

The Ramsar Convention is an intergovernmental treaty that embodies its member countries commitment to maintain the ecological character of wetlands, and to plan for the “wise use” or sustainable use of wetlands in their territories.

The Government Gazette 380 of 2013 declares 26 wetlands in Harare as protected areas and no development of any sort should be done on them.

Harare Wetlands Trust coordinator Julia Pierini said wetlands are the city’s main water sources other than rainfall run-off, and are under threat from cultivation to construction.

Pierini said protection of the environment in Zimbabwe was primarily provided for in the Environmental Management (EM) Act (Chapter 20:27), which stipulates that it was to prevail over any other law in conflict or inconsistent with its provisions.

“In terms of Section 113 of the EM Act, it is an offence to reclaim or drain any wetland; adversely affect any animal or plant life on a wetland or disturb any wetland by drilling or tunnelling in a manner that has or is likely to have an adverse impact. This would obviously include the drilling of boreholes to extract water from the wetland and construction on wetlands.

“It has increasingly been brought to our attention the extent of irregularities regarding development on wetlands with the City of Harare in respect of the contraventions of Section 152 of the Urban Councils Act and Section 26 of the Regional Town and Country Planning Act which is gravely impacting on wetland integrity within the City of Harare.

“If left unchecked, this will compromise the life sustaining wetland ecosystem functions such as water provisioning, purification and flood attenuation,” she said.

Most residents have expressed concern over developments on wetlands and some have successfully stopped these developments through the courts.

In the past, wetlands were preserved and protected as main sources of water, and no cultivation of any sort was allowed on them.

Among the many issues raised on wetland developments is the Monavale vlei issue where a storm brewed, which has been internationally recognised as a Ramsar site by UNESCO, with the local residents contesting the construction of 121 cluster houses on the privately owned wetland.

Dorothy Wakeling of the Conservation Society of Monavale (COSMO), who is also a resident of Monavale said quite a lot of damage was done to the vlei during this period, which can and must be restored.

The Conservation Society of Monavale (COSMO) contested the awarding of the EIA and the building permit as the area is a wetland and a Ramsar Site and an interim stop order was awarded in favour of COSMO by the Administrative Court.

In another related case, Borrowdale residents wrote a petition to the Ministry of Local Government, Public Works and National Housing demanding a stop to the developments that were taking place on wetlands in their area.

This came after the residents woke up to the shock of seeing a grader excavating land on Stand number 37 Colray, which they argued was a wetlands reserved by the Government and no development should take place on the land.

In the same area there was concern over the development on another wetland near St John’s College between Fisher Avenue and Harare Drive where a bulldozer was seen destroying the wetland.

The residents argued that no communication was being made to them and they were shocked to see all these developments taking place without their knowledge.

They said the greatest danger with constructing on wetlands was that boreholes in wetlands pump water to other areas.

In a letter dated January 8, 2018, written by Richard Dawes on behalf of Borrowdale residents and addressed to The Principal Director of Physical Planning in the Ministry of Local Government, Public Works and National Housing, the residents argued that the development on the wetland on Stand 37 Colray would block the supply of water in the area since it is a source of water to the community.

“We refer to your letter date stamped on the 9th of November 2014 regarding the above (Re: Application in terms of section 49 (3) and (4) of the Regional Town and Country Planning Act (Chapter 29:12): proposed change of reservation over stand 37 Colray Township of Borrowdale Estate, Harare from open space and recreation to residential). I also refer to my meeting with yourself and Mrs Chimanda on the 10th of December 2014 at your offices, as well as our meeting on the 26th of January 2015 wherein we discussed Stand 37 Colray Township of Borrowdale Estate and the status of ‘Open Space and Recreation’.

“At the above meeting we as residents expressed our concern at any development on the said stand, as it is a critical “greenbelt” which not only provides recreational space for the community, however, is also an important ecological stand and a source of underground water for the community at large,” reads the letter.

The residents further argued that, “Over the past weeks, there has been activity on Stand 37 of Colray Township with a grader excavating on the stand. It is our concern that there could be someone who is intending to build on this stand, thereby disrupting the designation bestowed on this stand as ‘Open Space and Recreation’ as well as ecology and natural resource depended on by the community.”

Recently, the High Court stopped former Labour and Social Welfare Minister Petronella Kagonye from constructing a wedding venue inside the Hillside Park at an intersection between Chiremba Road and Brooks Drive near OK Mart, which is a wetland.

Residents of Hillside had raised alarm over the conversion of their local park into a wedding venue, arguing that the place is a wetland and not suitable for any type of development.

There was another outcry among Greendale residents in the Athlone area over a new development taking place on a wetland along Latimar road.

At the wetland, the land has been cleared and there are allegations that residential stands were being sold there.

Stands have been pegged and boreholes drilled at the wetland, and this has angered residents as they allege that no communication was made to them about the new developments.

The contradiction on this wetland is that their local Ward 9 councillor Stewart Mutizwa, who is also the vice-chairman of the City of Harare’s Environmental Management Committee, which is lobbying for the protection of wetlands, confirmed that the land was sold during the quick sales period when council was raising money for its operations and approved the wetland for the development of flats.

He said the wetland was designated or surveyed as a development site for flats long ago. However, now there was already a place that has been approved by council, but there were other people, who have extended that development encroaching into the wetland.

Wetlands expert Professor Christopher Magadza, a biological sciences lecture at the University of Zimbabwe said, “We do not object for developments to happen, but there are proper places where these developments should be carried out not on wetlands. If you hear frogs crocking in a stream it means the stream is clean and is performing its functions of cleaning pollutions and so forth.

“We can substitute nature with technology, but that is what has led to the ruin of Lake Chivero. We trust too much on technology and it has been taken over by events and Lake Chivero is in a pretty sorry state.”

Ward 41 councillor Kudzai Kadzombe, who chairs the committee said they were surprised at the rate at which developments were taking place on wetlands.

Clr Kadzombe said these developments were contributing to the water crisis in Harare as wetlands were reserved as sources of water and destroying them was resulting is Lake Chivero receiving little water.

Clr Kadzombe also said that, as a committee they were going to investigate and find out how residential as well as commercial stands were parcelled out for development at the expense of the city.

According to the Environmental Management Agency (EMA), in Zimbabwe, commercial and housing construction projects are threatening wetlands.

Harare provincial environmental manager for EMA Robson Mavondo said the law articulates that no construction of whatsoever must be done on a wetland.

It directly tampers with natural water collection and leads to flooding. It can also expose you to water-borne diseases such as cholera and typhoid, worse still the building can collapse as what happened to houses built in wetlands in Chitungwiza early this year. Last year, houses built in a wetland in Monavale and Dzivaresekwa were affected by flashfloods during the rainy season,” he said.