THE World Food Programme (WFP) has predicted a surge in the demand for food aid during the 2020/2021 lean season in Zimbabwe, with over 4,5 million people in rural communities requiring urgent assistance. 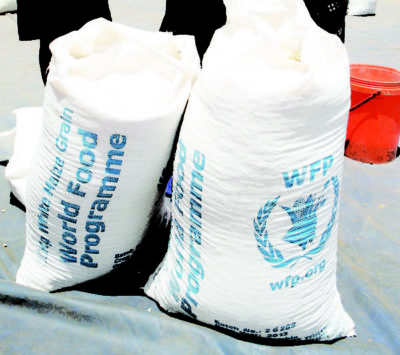 According to the latest United Nations Office for the Co-ordination of Humanitarian Affairs (UNOCHA) situation report for Zimbabwe, many people in the country will be facing starvation during the 2020/21 lean season which usually starts in September to March.

“Erratic and late 2019/2020 rains have impacted the 2020 maize crop and crop assessment indicates yields and production are significantly down. The food gap (import requirement) for a second year running will be close to one million tonnes,” the report read in part.

“Already, WFP is anticipating greater need for the 2020/2021 lean season and is programming for 4,5 million and 550 000 people in rural and urban communities respectively requiring food assistance support.”

During the 2019/20 season, Zimbabwe managed to produce 1,06 million metric tonnes of cereal, against a 2,23 million national demand.

The 2020 humanitarian response plan (HRP), launched on April 2, 2020, indicates that seven million people in urban and rural areas are in urgent need of humanitarian assistance across Zimbabwe, compared to 5,5 million in August last year.

“Since the launch of the revised humanitarian appeal in August 2019, circumstances for millions of Zimbabweans have worsened. Drought and crop failure, exacerbated by macro-economic challenges and austerity measures, have directly affected vulnerable households in both rural and urban communities,” it said.

“Inﬂation continues to erode purchasing power and affordability of food and other essential goods is a daily challenge. The delivery of health care, clean water and sanitation, and education has been constrained and millions of people are facing challenges to access vital services.”

The report says the United Nations and humanitarian partners have revised the HRP for Zimbabwe to include response to the COVID-19 outbreak.

The COVID-19 addendum requires US$84,9 million to respond to the immediate public health crisis and the secondary impacts of the pandemic on vulnerable people, in addition to the $715 million required in the HRP, the report added.

“In addition to the commitments to the HRP recorded above through the financial tracking system (FTS), a number of pledges are in the process of being ﬁnalised, including $30 million for the HRP and $11 million for the COVID-19 response from UKAid, $13 million from the European Commission and $200 000 from Canada. In addition, carryover funding of agencies from 2019 will be reflected in FTS,” it said.

“The drought and economic situation have heightened protection risks, particularly for women and children.”

Over a year after Cyclone Idai hit Zimbabwe in March last year, UNOCHA said 128 270 people remain in need of humanitarian assistance across the 12 affected districts in Manicaland and Masvingo provinces.

Newer Post
Is there a way to get consistently profitable in sports betting?
Older Post
AMHVoices: Let’s face our challenges as a collective