THE United Nations World Food Programme (WFP) has requested for US$130 million to sustain through August an emergency operation to prevent millions of the country’s most vulnerable people plunging deeper into hunger. 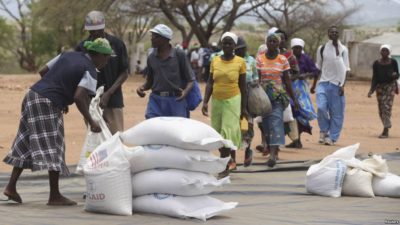 Zimbabwe is already in a severe climate and recession-induced hunger crisis while COVID-19 is also taking a heavy toll on the economy.

“With most Zimbabweans already struggling to put food on the table, the COVID-19 pandemic risks even wider and deeper desperation. We must all do our utmost to prevent this tragedy turning into a catastrophe,” said Eddie Rowe, WFP’s country director.

He added that the organisation had been failing to assist as many people as they would in the past since last year.

“WFP is planning to assist 4,1 million people in April, but insufficient funding has prevented us from achieving the same monthly target since the turn of the year,” Rowe said.

WFP is, therefore, pre-positioning three months of food and cash assistance, rolling out new risk-control measures at distributions for the COVID-19.

The United Nations agent recently welcomed a contribution of US$1,5 million from Russia to assist more than
100 000 people in Hwange, Nkayi and Zvishavane districts, who are among the worst affected by severe drought and food insecurity in the country.

A recent nationwide assessment, Integrated Food Security Phase Classification shows that the number of acutely food insecure Zimbabweans has risen to 4,3 million, from 3,8 million at the end of last year.

However, 56 of the country’s 60 districts are now categorised as experiencing “crisis” hunger.

In March, it reached 3,7 million of the most vulnerable Zimbabweans.

The total number of food insecure people stands at 7,7 million, more than half the population.

Rowe said the US$130 million being urgently sought by WFP was part of a total food assistance requirement of US$472 million through to December.