What really matters in the World today?

Source: What really matters in the World today? | The Zimbabwean 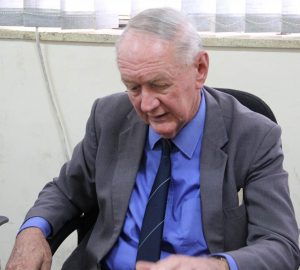 This Covid thing has at least given everyone a chance to reset. To think about what is really important and to try to restore some semblance of sanity to how we live and what we believe.

I had lunch this week with the Japanese Ambassador and was struck by his sense of culture and history. A very modern man but remaining deeply Japanese in life. We talked about Asia and its history and politics. I learned a great deal.

Remember when Mr. Mugabe called the people of Mbare in Harare – “people without a totem”. In many ways he was always very perceptive and in this short sentence he described many of our people as people who had no sense of who they are or where they come from. Almost a lost generation who have forgotten what it is to be African.

I am afraid that is now common across the world. Young people who live where they choose and work at jobs where they make a lot of money, even wealth, and yet have lost any sense of what it is to be Japanese, Chinese, American or even Indian – they have no home country, often no extended family and they live lives, often in isolation. In fact, loneliness has become one of the great scourges of the 21st Century. It is time to reset and to re-order our values.

I was struck today when my son read out of the Book of Isaiah (Chapter 40) the following words in his opening remarks in our Sunday service:

“Whom did the Lord consult to enlighten him and who taught him the right way? Who was it that taught him knowledge?”

In this passage God asks who advised Him what to do and what not to do when He created the Universe. This is not physics; it is about how we should live in the world He created. He sets the rules by which we should live and if we fail to acknowledge this in the way we order our priorities we will pretty soon discover that life is not turning out as we expected.

When I was younger (much younger), I was a very competitive and ambitious man. I knew what I wanted and went after it and when, at the age of 38 I found myself on the top of the pile and in the big time in business, I sat behind my desk and suddenly realised it meant nothing. What I had been chasing was in fact an empty brown bag. I was travelling 200 days a year, living in five star hotels and airplane seats. Someone with power over others and whose decisions changed lives and even communities.

Today I would give all of that up just to sit on the side lines at our local school to cheer my grandchild playing a game of hockey. It is a shame so many of us discover this too late in life and we die leaving behind what is in reality just the debris of a failed life, even if it is billions of dollars, or Yen or what! Fame is even worse as a god to be pursued and yet we lust after it and make massive sacrifices to its edifice. Then that most ridiculous of human ambitions; power.

21st century men and women sit on top of a pile of what we call history. We have experimented with Marxism, Socialism, Capitalism. We have flocked to the idols of our time, Mau, Hitler. We have pursued the goals of freedom and democracy only to discover that they do not deliver. Now we pursue wealth on a scale that has never seemed possible. 5 men appear before the Senate in the USA and one commentator points out that between them they control more wealth that nearly a quarter of the Globe. We can now kill at a distance, our killers sipping cool drinks in a bunker equipped with space age technology that allows them to track and kill at will, and then go out and get a burger in the cafeteria nearby.

Yet what does it add up to in the end. We have a tiny invisible enemy that invades our lives and suddenly all that we have taken for granted is under threat. Tens of millions are thrown out of work, the economic output of the world economy slumps and in a panic our leaders print money. Mountains of it and cheer when that most fragile of our indictors – the stock market rises to new heights on an air cushion of money.

But dig deeper and you discover a malaise that seems to infect every country. In that most iconic of European Cities, Paris, week after week, the “Yellow Jackets” pour out onto the streets – no agenda, no leadership, just a collective wail of woe from a people who no longer see any sense or fulfilment in their lives. So often it is our political elite that takes the blame, in many cases they are to blame in some ways, but not always, just that they are a convenient target for the people they attempt to govern and who have lost their way.

Into that new reality, Isaiah speaks truth to society. He asks, do we really think that He did not cover these issues when He formed us from the dust on the ground? When His finger wrote true truth into history, did we really think that we might know better than the architect of life?” How foolish we are.

This week I was saddened when the European Union leadership admonished the Polish government over their stance to support family values and Christian principles. The family is in crisis across the globe and globalisation has made it worse. The consequences for a generation who are growing up in dysfunctional families are there for all to see.

It is no surprise to me that France has a Yellow Jacket movement – for a long time France has been the most godless nation in Europe. I would have thought that after thousands of years of human history that we would recognise that we need God in our lives. Without faith, life itself has little meaning. Without family and our extended families and even close knit communities, we are totally isolated and alone in a world too busy with itself to waste its time on us. If that does not terrify you, it should.

China and the Soviet Union both suppressed religion in all its different forms for the decades that they pursued those Marxist ideals in search for something that does not exist, the perfect society. When finally, they abandoned this massive experiment and the curtain was swept aside, what did we find; a Church in Russia that looked much as it did in the time of the Tsars. In China the fastest growing Church in the world is taking root with hundreds of millions of new faithful.

If Covid gives us an opportunity to reset our lives and rethink our values, then we need to recognise that the society we are creating in this century may be less ideological but still fails to deliver what is important. Christ in His teachings said that there were really only two commandments by which every person should live: Love God and Love your neighbour. Simple really and we all know what that means.

It means we must pursue our lives knowing that ultimately we are accountable to God and that the “fear of God” is the beginning of wisdom. Then we are to live our lives working in ways that always benefit others. Just think what a revolution that would unleash. It would wipe out poverty, it would create a more equal world, it would eliminate corruption and theft and crime. It would give us all a sense of our own value and worth, it would create relationships that would last all our lives and accompany us to our graves. It would make life worth living.

That is what the world around us is missing.

The post What really matters in the World today? appeared first on The Zimbabwean.