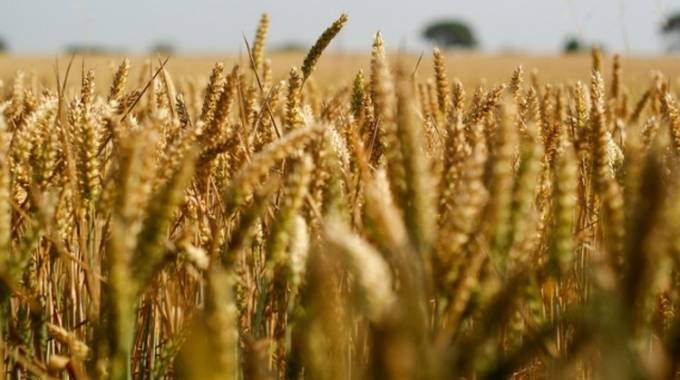 GOVERNMENT has dispatched two combine harvesters to each of the country’s 10 provinces in a move set to speed up wheat harvesting ahead of the rainy season.

The equipment is being loaned to wheat farmers through the Agricultural Development Bank of Zimbabwe (Agribank) with payments for use of the facility set to be done after harvesting.

The combine harvesters are part of the US$51 million mechanisation facility from Belarus, which was launched by President Mnangagwa last week. Speaking at a field day to test the combine harvesters at Justice Paddington Garwe’s farm yesterday, the Minister of Lands, Agriculture, Water and Rural Resettlement, Dr Anxious Masuka, said the move was proof of Government efforts to revive the agriculture sector.

“We came here to evaluate the efficiency of this combine harvester. Firstly, it can do 30 hectares a day on an even field, secondly, it cuts wheat of even higher moisture content to 25 percent,” said Dr Masuka.

Economist Professor Gift Mugano commended the move and said the equipment would go a long way in enhancing food security in the country.

“A recent report by CBZ Bank shows that we have serious shortages of farming equipment in the country,” said Prof Mugano.

An additional equipment facility will involve 474 tractors, 210 planters, 60 combine harvesters and five lowbed trucks with the rest expected over the next couple of months. Under the facility, farmers are expected to buy the equipment, and loans will be available at Stanbic Bank and CBZ while Agribank will also participate through its Special Purpose Vehicle on combine harvesters.

All equipment in the first phase of the facility will be delivered by December while in the second phase an assembly plant will be established in Zimbabwe.

This facility follows a similar facility in June with John Deere, an American manufacturer.