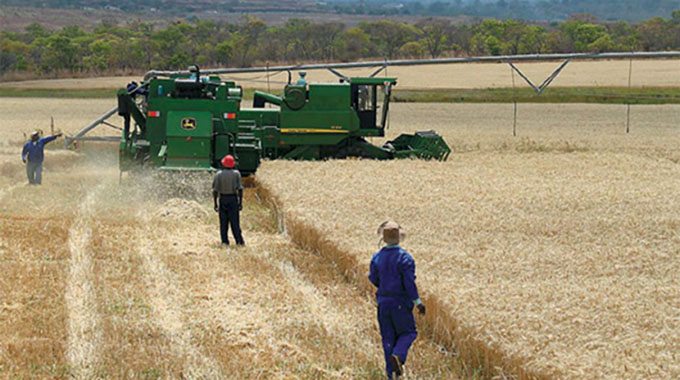 Enacy Mapakame Herald Reporter
The recent 9 percent increase in the international price of wheat will put pressure on the country’s foreign exchange requirements and on bread and flour prices, local experts say and opens more opportunities for increased local producation.

The jump in the global price of wheat has the potential to affect the entire value chain, which cuts across cereal, flour, bread and other confectionaries production while the end consumer bears the pressure.

International wheat suppliers increased the cost of the cereal by between $35 and $45 per tonne on the back of an increase in transport costs, increased demand as climate change effects have also strained production.

Zimbabwe has been importing the grain at $375 per tonne, which will increase to around $405 after effecting the price increase. The cost also depends on the port being used.

Economist Dr Gift Mugano ,said the wheat price hike was bad for the country currently experiencing foreign currency shortages. This also threatened to increase the import bill at a time the country is seized with efforts to narrow its trade deficit.

“This means the country’s import bill will automatically go up and further strain the foreign exchange,” said Dr Mugano by telephone.

“Wheat is critical in Zimbabwe. In the face of foreign currency shortages, some areas will be sacrificed while priority is given to wheat.

“This increment may further increase as time goes on. Production in the supplier countries is also affected by climate change and other countries may start to panic buy.

“This means by the time we want to start buying, prices would have gone up again. This will affect the whole value chain,” he said.

On a monthly basis, wheat consumption is estimated at 38 000 tonnes for the production of bread, confectioneries, biscuits and other flour related products.

Currently, local millers have sourced 200 000 tonnes of wheat from Germany and Canada, whose consignment is coming in instalments until the winter harvesting season.

Of the 200 000 tonnes, millers have only received the first batch of 30 000 tonnes and there are fears the remaining 170 000 tonnes could also be affected by the new pricing regime.

According the Food and Agriculture Organisation (FAO) global cereal production for 2017 was around 2,64 billion tonnes, up from 2,61 billion tonnes recorded in the prior comparable period.

Wheat production is expected to decline by 0,3 percent year on year to 757 million tonnes, from 759,8 million tonnes in 2016 /17 year with the projected decline stemming from forecast reductions in the EU and Russian Federation, reflecting anticipated fall in yields from the highs of 2017.

Further declines were experienced in the following years and these were attributed to the reduction in the area planted from 11 600 hectares in 2012, to around 8 500 hectares in 2013, as farmers switched to cash crops such as tobacco, whose profits per hectare are much higher.

Dr Mugano said Zimbabwe could return to its glory days and achieve the peak production of 325 000 tonnes recorded in 1990 through both political will and support from financial institutions as well as other stakeholders.

This, he said, would cut on importation of the grain while reducing the import bill.

Resuscitation and implementation of the commodities exchange would be essential in boosting agriculture production in the country.