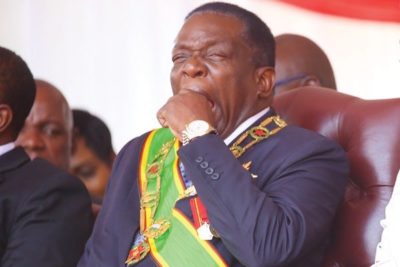 THERE was widespread celebration across the country last week after it was announced that we had discovered oil somewhere in rural Muzarabani.

At The Herald, the world’s most excitable newspaper, the news was received with the usual excessive enthusiasm.
“The announcement comes as exciting news for Zimbabweans who are experiencing fuel shortages,” the paper gushed, under the triumphant headline: ED confirms oil, gas discovery.

As news filtered out to the world, all our detractors looked upon the country with great envy and jealousy.

In no time, people were asking silly questions, doubting our God-given find. Why people would doubt this, one can never know. Surely, did Prophet Makandiwa not tell us months ago that there could be oil in the country? That this was old information, backed by actual research by a whole company called Mobil, is neither here nor there.

It was therefore disappointing when it later turned out that we had actually not discovered oil yet, but that the company involved merely suspected that there could be oil.

How could this be, when our state media, and even the Ministry of Information, had declared that we in fact had struck oil? Since when does The Herald lie? What has happened to this paragon of great and credible journalism?

As for the Ministry of Information, someone should take away their phone for a while until they calm down.

There were howls of disappointment all across the nation. This would have been the second time we discovered fuel; the first time being the great diesel discovery of Chinhoyi in 2007, our nation’s most momentous occasion since Independence Day.

In the anniversary week of his sacking from government, for “lacking probity”, President Emmerson Mnangagwa has been marking the event by aping the man who fired him.

First, he watched with glee as a captured church leader plied the First Lady with copious amounts of bootlicking drivel. Second, he was photographed cutting a giant cake. Third, he went on a pointless foreign trip, leaving behind an economic crisis to sort itself out — and on a Swiss plane for good measure!

At a meeting of the Zion Christian Church, Bishop Nehemiah Mutendi laid out the sort of praise the nation had become accustomed to under the regime of Dr Amai, who was really the ruler of the land in the last days. Just as Johannes Ndanga told us, Dr Amai was sent from the Lord, we had bishop Ndanga telling us First Lady Auxilia was a saint of Mother Teresa-level holiness.

“She reaches to the poor and the sick. She went around cleaning people’s homes and washing their clothes. I sat down and said to myself this woman is more or less like Mother Teresa. I asked myself if she was the Mother Teresa of Africa. How lucky are we to have such as a person as a First Lady,” the bishop crooned.

If merely washing someone’s clothes turns you into a holy saint, our houses are surely filled with holiness.

This week, the people of Guinea were gracious enough to host our leader up there in Conakry. He received all the trappings that fellow African strongmen regularly give each other: gun salutes, colourful sash, those ghastly flowers and even an award or two.

“Guinea Conakry has decorated President Mnangagwa with the Grand Cross Award in honour of his visit, the first ever by a sitting Zimbabwean leader,” The Herald told us.

We were all happy to see our leader visiting dams over there and other infrastructure. Maybe he can learn one or two things; after all, Guinea’s economy grew over 6% last year.

However, the nation will also be glad to hear of a few interesting things about the host, President Alpha Condé. He was elected in 2010, ending years of dictatorship. However, now that he has tasted the irresistible sweetness of life in the palace, his view on term limits has become increasingly hazy.

Muckraker recently read an interview in which Conde was asked if he will stay for another term. “The Guinean population’s decision, not mine”, he said.

Very familiar. He then argued that African presidents should not have term limits, because these get in the way of them carrying out ambitious long-term projects. In other words, African presidents tend to take their time doing their job, so they need more time to do it.

According to The Herald, the President has promised us that good times are coming soon. “Good times will soon roll — ED”.

This must come as a relief to Zimbabweans.

We are not told when exactly these good times are likely to start rolling. However, judging by what Mnangagwa is said to have told the ZCC gathering, we are a nation in childbirth.

“He said pregnant women (during labour) are encouraged to persevere under pain during that time and after a child is finally delivered mothers become very happy and will be smiling all the way,” it was reported.

Many had to go back to the Zanu PF manifesto once again to try and find the section where they were promised childbirth pains. There is nothing of the sort, just promises of millions of houses, jobs and general milk and honey.

Muckraker has never given birth, but is not quite ready to go through it. Nobody promised us childbirth during the election. Who can take such risks right now? Especially if it is a government hospital.

Over at the MDC Alliance, it has been announced that the organisation is still trying to decide whether it wants to be a democratic party or not.

In Bulawayo, the deputy mayor was elected to the post. He was then told to quit within seven days. He did just that, only to be re-elected two days later. Now there are claims he bribed his way back in. In Victoria Falls and Chegutu, mayors elected by councillors have been told to step down for handpicked candidates. Dozens of other officials have been sacked from the party with no due process, having been fired for standing as independents. Zanu PF was proud to see its terms, such as “expelled themselves”, being used so liberally in the MDC. Who needs due process and hearings when one can merely be accused of going against the President, one of the biggest crimes in Zimbabwean politics? Despite this, MDC Alliance leader Nelson Chamisa has denied that he is a dictator calling himself, “such a sweet guy who deserves all the good things”.

Chamisa’s utterances would carry weight before one remembers that former president Robert Mugabe also stood on mountain tops declaring that he was the epitome of democracy despite glaring evidence to the contrary!