Why a Mugabe victory would be good for Zimbabwe

Robert Mugabe belongs to a dying breed of politicians on the African continent. Molded in the crucible of politics of nationalism, he emerges as the surviving face of African nationalism radicalised through armed resistance to settler colonialism. It is this dimension of his generational politics, this trait of his character, which Britain and the western world has not been able to comprehend. 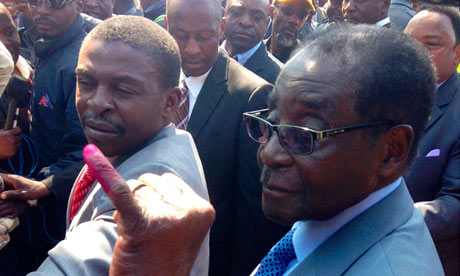 Mugabe is more than just a politician, he leads a cause, or as his militant supporters would say, he has become the cause itself. And the cause has something to do with giving back the African his dignity well beyond symbols of nominal independence. A few days ago he told his supporters political independence was inadequate if it did not yield economic freedom. While it is fashionable to charge Mugabe with destroyingZimbabwe in its prime, little regard is given to the fact that the average African country has been granted nominal political independence amid economic subservience. And as the convulsions in northern Africa and even Brazil show, the flag does not always fly away.

What continues to confound Mugabe’s western opponents – and there are many in the west who want to see the back of him – is that his brand of post-colonial politics is steeped in the economic self-empowerment of the Zimbabweans, which resonates with the continent. More than many other African leaders, Mugabe draws cheers across the continent.

In western lore he has been a terrorist, a Marxist ideologue, now a bloodthirsty tyrant, stereotypes that he alone on the continent has been able to mock and laugh off. “If standing for my people’s aspirations makes me a Hitler,” he once said, “let me be a Hitler a thousand times.”

With seven earned degrees spanning disciplines, he is not your archetypal tin pot dictator. “The trouble with Mugabe,” the former British foreign secretary Douglas Hurd once said, is that “he thinks like us”. And knows us, one could have added.

From Margaret Thatcher’s grudging acknowledgement to Tony Blair’s open hostility, the British establishment has had to contend with an assertive Mugabe, ironically himself an epitome of British success. Educated by the Jesuits in the British settler colony of Rhodesia, he is what the late Nigerian writer Chinua Achebe would have called an educated “British-protected person”. And like Caliban in The Tempest, his profit from this British education is that he knows the British language well enough and uses it to curse them. “It is those demons at No 10 Downing Street that need exorcising,” Mugabe once castigated Blair, yet still escaping the fate that visited Patrice Lumumba, the elected leader of the DRC assassinated in a US-sponsored plot, for a milder chastisement of the Belgian king in 1960.

The land issue, a question which only history is still to settle. Despoiled of its land through a series of racial colonial measures, Zimbabwe at independence inherited a gross skew in land ownership. A small, reclusive white settler population of 4,000 owned nearly half of arable Zimbabwe – the best half at that – with the other half, packing over 10 million black Zimbabweans. History had fated Zimbabwe to a racial conflict, preordained a racially polarising fight for Mugabe. And to make matters worse, land was the casus belli of the 15-year bush war which Mugabe led, and had dominated decolonisation talks at Lancaster House on the last quarter of 1979. That gave this issue a surfeit of emotion, in equal measure across the racial divide.

Mugabe decided to tackle this matter conclusively, and defiantly after the Blair government reneged on promises to fund land redistribution made under the Lancaster House agreement.

What followed was more than a decade of a damaging standoff with the former colonial master, Britain. More damaging to Zimbabwe, the underdog. And here history gets split in its verdict: was Mugabe reckless and selfish, or did he lead his people through yet another revolution? The western world thinks he did it to spite competent white farmers who owned the land by a colonial right that persisted into independence; that he led a wholesale expropriation of “white-owned” land to win votes against the Movement for Democratic Change, MDC, a new, labour-led party which posed a real threat to his rule. And the consequences have been there for all to see: an economic meltdown; a descent from breadbasket to a basket case; a rollback in civil liberties. The list of charges against him is endless.

I have seen Mugabe fight for his political life before, in the controversial and contested 2008 elections. Then his back was against the wall.

The economy had spun out of control, threatening to sweep him under politically. Sanctions which the western world had unleashed on Zimbabwe, ostensibly for imperiling human rights, many say as punishment for taking back the land, were biting his people as never before. The adversities were overwhelming. Yet he hung on, just. It is this ability to ride the storm, which attracted me to make the film Mugabe: Villain or Hero?, where I spent three years in Zimbabwe gaining rare access to the Zimbabwean leader.

Today Mugabe is back in the election trenches in a radically different political environment. Blair, Gordon Brown and George W Bush, his foremost opponents are gone.

More dramatically, the MDC, Mugabe’s supposed bete noire, is on course to a crushing defeat in the latest election. Morgan Tsvangirai’s claims of vote rigging will fall on deaf ears, even if David Cameron and Barack Obama stick their noses in. The official observers passed the election off as free, fair and credible. The Zimbabwean people will inevitably accept the winner.

Will Cameron and Obama have the appetite for a further fight with Mugabe, when they know that Tsvangirai is a flawed candidate?

Mugabe and his Zanu-PF are on a surge, seemingly unstoppable towards a second coming. And tellingly, the election is being fought on the theme of “indigenisation and economic empowerment” by which Mugabe, following up on his land reforms, now seeks a 51% stake in the economy for his people. That this is another racially polarising policy is without doubt. But the amazing thing is that it is a policy which seems to give Mugabe and his Zanu-PF party a marked edge over the MDC with its neo-liberal agenda of foreign-investment-led job-creation.

Even more surprising is that the youth – history’s motive force in north Africa and around the world – are finding favour with Mugabe’s fiery rhetoric, already founded in the land reform programme whose benefits are beginning to show. Mugabe, the man reviled in the west, may very well have infected a successor generation in ways African politics and politicians – present and future – may find hard to ignore, let alone cure. At 89, the infirmities of time may very well make this election his last stand against the west. The issue may boil down to what after him. But for now, all indications point to his bagging the latest poll.