Women of steel ready for the task 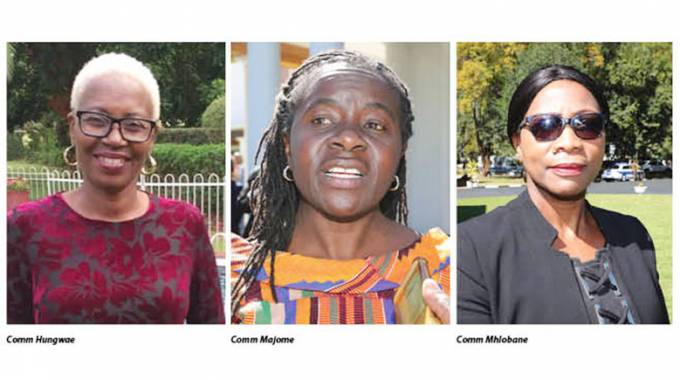 FEMALE commissioners in the Zimbabwe Anti-Corruption Commission (Zacc), sworn-in by President Mnangagwa last week, are oozing with confidence that they will carve their mark in making the anti-graft body deliver on its mandate.

They cite the members’ diverse backgrounds and skills as the major strength of the body.

Comm Hungwe is yet to be sworn in after missing last week’s ceremony due to other commitments.

In an interview with The Sunday Mail, Comm Majome, a legal expert and former MDC-T legislator, was adamant that this time around, Zacc had found its teeth.

“This commission is built to work and to deliver,” she said.

Comm Majome’s never-say-die spirit has left many dumbfounded as she bounced back after a rather frustrating 2018 in which she dumped party politics citing unfair treatment.

Her departure was in protest after the National Assembly Harare West seat, which had initially been reserved for her, had been put up for contestation in the party’s primary elections.

She then stood as an independent candidate in last year’s July 30 elections, but lost the contest to Joanna Mamombe of the MDC-Alliance.

In the ensuing months, Comm Majome announced she “was going to live the life of a private citizen.”

However, in November, she was one of the 10 lawyers vying for the Prosecutor General’s post which fell vacant after Ray Goba’s resignation.

Comm Majome said her desire to positively contribute towards the country’s affairs saw her joining party politics when the MDC was formed.

“In this particular position, I realise that this is part of public office, but it is very consistent with the decision that I took to get out of political contestation, party business and politics.

“Having left that arena, an opportunity arose. I was nominated for this commission and I accepted because I still want outcomes for my country.

“I still want to influence the way things are done and I believe that I can actually contribute towards them as a member of this commission. The issue of corruption really needs attention.

“I believe that I have the skills and aptitude that will enable me to fulfil the role.

“I said, if Zimbabwe wants to use me, I am happy, I am available.”

Comm Majome maintains that she is a determined character.

She noted how at the age of nine, with the assistance of her father and through the then Ministry of Education, she pushed for the removal of books which carried racist overtones from her school library.

In high school, she lobbied for the abandonment of a conduct in which only girls would sweep classroom floors.

Comm Majome added that as a student at University of Zimbabwe, she pushed for the creation of a descent hall of residence for female students.

“I like to influence the way things are done, hopefully, for the better.

“Zimbabwe does require people to step up in various roles. Our society is actually mean to women. There are a few women who get the opportunity in the spheres that I find myself in and can serve well. So we have a responsibility,” she said.

Speaking of her experience as former chairperson of the Parliamentary Portfolio Committee on Justice, Legal and Parliamentary Affairs, Comm Majome relayed fears that the anti-graft commission was always under-resourced.

“In terms of the Constitution, commissions and other bodies that are established by the Supreme Law must be given an opportunity to appear before a committee of Parliament and give their proposed budget in any particular year.

“The anti-corruption commission was the most orphaned or most marginalised commission from a budgetary point of view.

“I am hoping that the executive will fund the activities of this commission,” she noted.

Born in 1971, Comm Majome has held posts of Ward Councillor in Hwange as well as chairperson of the local board in that town.

Apart from being spokesperson of the National Constitutional Assembly, Comm Majome was also Secretary for Constitutional and Party Affairs within the MDC-T.

In a separate interview, Comm Mhlobane said there are huge expectations, from various stakeholders, for the commission to deliver.

She said the public expects to see corruption cases being brought before the courts, with solid evidence and tough action taken against the culprits.

An expert in accounting, business administration, finance and strategic management, Comm Mhlobane said there is need for water tight systems to strengthen the commission’s operations.

“The public’s concern is that they feel a lot of funds or assets have been abused by people in both the public and private sectors,” she said.

“They feel that nothing has been done to the people behind the corrupt activities.

“The public feels that the economic situation is what it is because of corruption. Whether that is correct or not, that is another story.

“As a commission, we feel that we need to really scrutinise, strengthen the capacity to investigate as well as make sure that the convictions stand in the courts of law.”

Comm Mhlobane, who also holds an accounting degree and a Master of Business Administration, is confident her experience from sitting on various parastatal boards positioned her well to understand the abuses taking place in public offices

“I have the necessary qualifications. I understand systems at a corporate level as well as corporate governance perspective in terms of what is expected of economic public financial management,” she said.

Comm Mhlobane has worked as an accountant in Government and in the banking sector, the Central Bank included.

She has done consultancy work on business and strategic planning, including a project with the Government of Lesotho.

With initial indications that over 200 corruption cases have already been lined up for investigation, Comm Mhlobane said the cases are a demonstration of the public’s trust in the commission.

“Time is of essence. There is no point in having these cases hanging around for too long,” she said.

“Justice delayed is justice denied. You do not want to delay justice. If there are assets out there, were they acquired corruptly?

“We want those assets to come back when they still have value, we want the public to benefit and we want the economy to grow.

“What I can promise the public is that we will definitely deliver the results. The composition of the commission is such that there is no reason for not delivering. All the experience and skills are there.”

She believes that in setting up the team, the President considered individual merits, not just gender balance.

“The interesting thing with gender is that it is all about socialisation. There are certain jobs we had been socialised to believe, as a people, that they cannot be done by women. But our chairperson’s competence, as a judge, shows that her success has nothing to do with her being a woman,” said the commissioner.

“She is competent and a well-qualified person to lead this commission, so are all the women that have been appointed to the commission, including myself.

“An opportunity has been given to us, regardless of whether you are female or male. It is an opportunity to tackle this scourge, which is corruption.”

A wife and mother of three, she is a gym fanatic and a devote Christian.