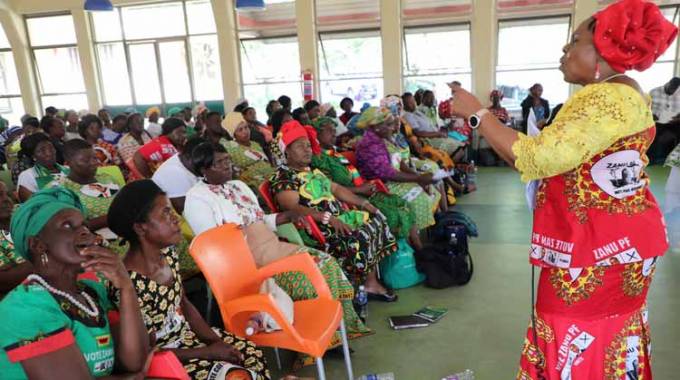 Women should resolutely support the policies being implemented by Government in order to get the economy back on track, Zanu-PF Women’s League national secretary for administration, Cde Monica Mutsvangwa has said.

She was speaking at a Zanu-PF Women’s League inter-district conference in Mutare yesterday.

The bi-annual conference seeks to review the party’s programmes.

Cde Mutsvangwa, who is also Minister of Information, Publicity and Broadcasting Services, said Government is committed to reviving the economy.

“President Mnangagwa has made it clear that the policies we are implementing are meant to fix the economy and that they will be painful to us all,” she said.

“But painful as they were, President Mnangagwa has made sure there are safety nets to cushion the people, like the provision of cheaper Zupco buses.

“You as leaders should go back to the people with information on these policies and make them understand that these measures are beginning to bear fruit, that they have served their purpose and the economy is now on its way to recovery.”

She urged women to stay focussed, and not be swayed by detractors who are bent on portraying a negative image of the country.

“It took years for the economy to deteriorate and all those things will not be fixed overnight, but President Mnangagwa has been trying to ensure that it is fixed as quickly as possible,” said Cde Mutsvangwa.

“We are now seeing progress on the road infrastructure and on the other work being done. But there are those who are trying to sabotage the President’s work. They are keen to see people suffer.

“Those who say sanctions are targeted want to mislead the people. They have realised that the country is beginning to heal, so they come up with cooked up stories of fake abductions and violations of human rights.

“If we are not careful of our enemies, we might lose focus. Let us remain resolute and support our President.”

Minister Mutsvangwa said the number of people in need of food aid in Manicaland has increased significantly, adding that Government will ensure they receive food aid.

“We should remember that 2023 is just around the corner,” she said.

“Parallel structures within the party will only hurt us. This is why we are taking everyone on board — the traditional leaders’ wives, parliamentarians’ spouses and religious leaders.

“We do not want to leave anyone behind, we will get there,” she said.