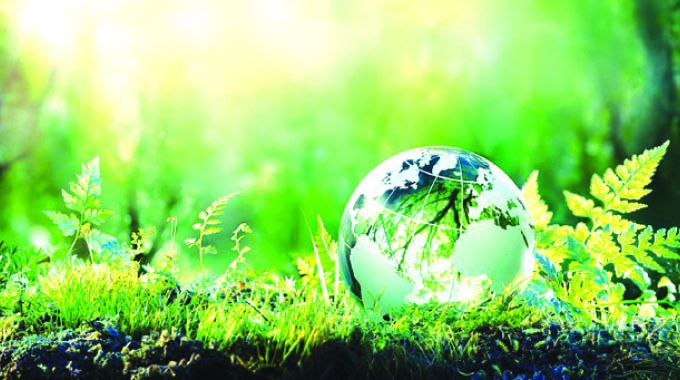 The protection and improvement of the environment is an issue of major importance that affects the well-being of people and economic development around the world.

Zimbabwe joins the rest of the world to mark World Environment Day tomorrow with various activities to raise awareness on environmental problems we are facing as a country such as air and water pollution, deforestation, veld fires, destruction of wildlife and plant diversity and numerous other problems.

They say the restoration process largely means assisting in the recovery of ecosystems that have been degraded or destroyed as well as conserving the ecosystems that still survive in the country.

The main target is to maintain healthier ecosystems with a richer and diverse biodiversity that benefits our soil quality leads to better yields of timber and other wildlife plants and animals, fish and creates larger stores of greenhouse gases.

“Restoration can happen in many ways — for example through actively planting or removing pressures so that nature can recover on its own. It is not always possible or desirable to return an ecosystem to its original state,” says a Geneva environmental based network.

The UN Decade on Ecosystem Restoration (2021— 2030) was proclaimed by the UN General Assembly to call for the protection and revival of ecosystems across the world for the benefit of nature.

It largely aims to halt the degradation of ecosystems and restore them to achieve global goals.

With health ecosystems, the world can enhance people’s livelihoods, fight the impact of climate change and reduce the erosion of biodiversity.

In Zimbabwe, veld fires have over the years caused severe environmental degradation.

They have reduced land cover thus exposing the land to agents of accelerated soil erosion, changes in the hydrological cycle, increase in overland flow or surface run off and modifications in various ecological processes.

Soil erosion, has in turn, led to siltation of rivers and dams reducing their water carrying capacity.

In fire season over the last few decades, there has been a marked increase in the area burnt by fires, fire incidences leading to loss of lives, property damaged and the country’s sensitive ecosystems, or lost.

Recently, the Environmental Management Agency (EMA) warned that 89 percent of the country is at high to extreme risk of veld fires, compared to 34 percent last year due to increased biomass as a result of the good rains received this season.

The agency says it has embarked on extensive education and awareness programmes to sensitise communities on veld fire management in an effort to prevent wildfires and protect lives, property and the environment as well as the bumper crop that is still in the fields across the country.

Prevention of wildfires is vital to the protection of our fragile ecosystems.

Zimbabwe’s Sixth National Report to the Convention on Biological Diversity (CBD) which was published by the Government last year provided an authoritative overview and some useful insights into the state of nature in the country.

The report noted the importance of biodiversity in addressing climate change and long-term food security, and concludes that action to protect biodiversity is essential to prevent future pandemics and loss of the country’s valuable animal and plant resources.

Of major concern, is the rapid loss of Zimbabwe’s biodiversity mainly from threats such as climate change and global warming, over-exploitation of natural resources, habitat loss and environmental degradation, pollution and invasive alien species.

The new study estimates that 54 plant species present in Zimbabwe are listed as threatened with extinction on the IUCN Red List of Threatened Species with 16 being endangered and 38 vulnerable.

“Twenty bird species that have been recorded in the country are globally threatened with extinction and of these four are critical endangered, five are endangered and 11 vulnerable,” researchers noted.

Eleven of Zimbabwe’s mammalian species including the lion, leopard, rhinoceros and elephants are listed as globally threatened with extinction.

Out of the country’s 145 fish species — the three-spotted tilapia, longfin tilapia and Kariba tilapia are threatened with extinction, with the latter reported to be critically endangered. Threats to Zimbabwe’s biodiversity are many and varied.

The report revealed that more than 150 non-native species have been identified, including 30 that are listed among the 100 of the world’s worst invasive alien species.

Lantana camara, black wattle (Acacia mearnsii), the Nile tilapia, patula or spreading-leaved pine and water hyacinth have been shown to be harmful to vegetation and water ecosystems in various parts of the country.

Agricultural biodiversity loss has also been documented, with the country losing a number of plant crop genetic resources.

Zimbabwe is not alone. Most countries in Africa too, are experiencing a dramatic loss of biodiversity.

Experts estimate that by 2100, climate change alone could cause the loss of over half of African bird and mammal species, as well as trigger a 20 percent – 30 percent decline in lake productivity (the plant and animal life produced by a lake), and a significant loss of plant species.

The IPBES report says there has been a 15 percent increase in global per capita consumption of materials since 1980 and a 300 percent increase in food crop production since 1970, reducing the habitat of some species and causing pollution through fertilisers.

Africa which is home to a rich and diverse animal, plant, and marine biodiversity could lose this vital ecosystem service which drives the continent’s economy and acts as a buffer to climate change.

Ongoing threats to African biodiversity from natural habitat loss and degradation (specially from agricultural expansion, direct over – exploitation of wildlife and fishery species and the spread of certain non-native invasive species have compounded the situation.

This loss of biodiversity affects livelihoods, water supply, food security and lessens resilience to extreme events, particularly for people living in rural areas who are often the poorest.

If no action is taken to halt the loss of biodiversity in Zimbabwe and most other African countries, the negative impact will be felt intensely in the coming decades.

Zimbabwe needs to take action and build a political momentum for restoration of the ecosystems. The plans, the strategies and policies are all there.

What we need more is action. We have to step up anti poaching activities, reduce deforestation, sand poaching, support and enhance the protection of our conservation parks and wetlands.

Promoting sustainable farming practices, greening our cities and cutting use of all hazardous substances could be the key to the restoration of our ecosystems.

The fight to conserve Zimbabwe’s biodiversity is quite complex and will require the country to join forces with other countries both at the regional and international level to tackle climate change and biodiversity loss in a more coordinated manner.