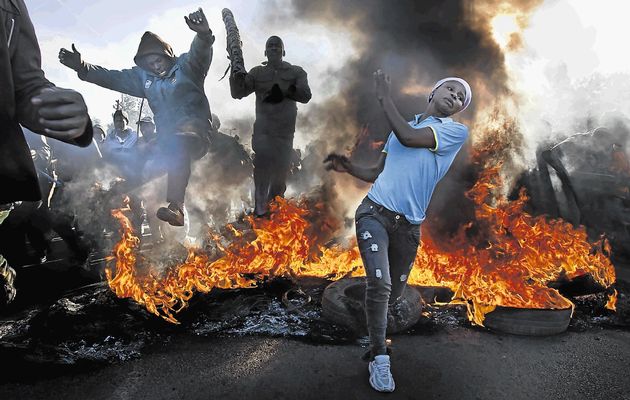 FIVE people were killed in xenophobic attacks in South Africa, police
said, as President Cyril Ramaphosa vowed to clamp down on what he
described as “acts of wanton violence” and the African Union and Nigeria
sounded the alarm.

Police fired rubber bullets and arrested 189 people in the township of
Alexandra on Tuesday, a day after clashing with looters who local media
said targeted foreign-owned businesses in several parts of the city.

Most of the deceased were South African, police said.
“I’m convening the ministers in the security cluster today (yesterday) to
make sure that we keep a close eye on these acts of wanton violence and
find ways of stopping them,” Ramaphosa said in a post on Twitter.

“There can be no justification for any South African to attack people from
other countries.”
Rocks, bricks and rubber bullets strewed the empty streets of

Alexandra on Tuesday, and Al Jazeera reporters at the scene saw police
firing rubber bullets at a crowd of 50 people who were hurling rocks.

About two dozen shops, owned by both foreigners and locals, were
vandalised or looted.

“They burnt everything,” Bangladeshi shop owner Kamrul Hasan told AFP news
agency in Alexandra, adding that his shop gets attacked every three to six
months.
“All my money is gone. If the [South African] government pays for my plane
ticket, I will go back to Bangladesh,” the 27-year-old said.

Lungelo Dlamini, a spokesperson for police, said the motive behind
Tuesday’s riots was not clear.

“They are just criminals who are looting and taking advantage of the
situation,” he told Al Jazeera.
Police arrested more than 91 people on Monday after protesters torched
cars and looted dozens of shops.
News24, a South African news agency, said Monday’s riots came after
hundreds of people marched in Johannesburg’s Central Business District
(CBD) demanding foreigners to leave. They targeted “shops they believed to
be owned by foreign nationals”, it reported.

Some African governments have issued warnings to their citizens over the
violence, with Zimbabwean Parliament summoning Foreign Affairs minister
Sibusiso Moyo to assure the nation on the safety of Zimbabweans living in
South Africa.

Speaker of the National Assembly Jacob Mudenda said he would direct Moyo
to come to the august House to face legislators over the issue.

“I will, through the leader of government business, (Ziyambi Ziyambi)
request the Foreign Affairs minister to make a statement to update the
nation on the safety of Zimbabweans in the Diaspora, especially South
Africa where violence has broken out,” Mudenda said.

He was making a ruling on independent Norton legislator Temba Mliswa’s
contribution on a point of privilege where he sought to understand what
action authorities have put in place to ensure the country’s citizens are
safe.

Nigerian President Muhammadu Buhari sent an envoy to South Africa
yesterday to “express Nigeria’s displeasure over the treatment of her
citizens”.

In a statement, the country’s high commission in South Africa described
the situation as “anarchy”. The government alleges that Nigerian-owned
businesses were targeted in Johannesburg and it has called on Nigerians to
come forward to report what has happened to them.
Ethiopia’s embassy in South Africa has advised its citizens to close their
businesses during the on-going tension, according to Ethiopia’s
state-linked Fana Broadcasting Corporate (FBC).
It also says that Ethiopians are advised to “distance themselves from any
confrontation and conflict” and not go out wearing expensive jewellery.

Meanwhile, Zambia’s Transport ministry has said that lorry drivers should
“avoid travelling to South Africa until the security situation improves”.

The statement refers to reported attacks on foreign lorry drivers. The
South African media say that there have been “numerous incidents” of
vehicles being looted.
Nigeria’s Foreign minister Geoffrey Onyeama reacted strongly to the scenes
of violence on Monday.

“Received sickening and depressing news of continued burning and looting
of Nigerian shops and premises in #SouthAfrica by mindless criminals with
ineffective police protection,” he said on Twitter. “Enough is enough. We
will take definitive measures.”
In 2015, Nigeria had recalled its ambassador to South Africa following a
spate of attacks against immigrants.

“Xenophobia is just an excuse that is being used by people to commit
criminal acts,” he told reporters on Monday afternoon. “It is not
xenophobia, but pure criminality.”
In a statement on Monday, the South African Human Rights Commission said
it was “deeply concerned by violence, looting, arson and vandalism
plaguing much of Johannesburg”.

South Africa is a major destination for economic migrants from other parts
of the continent, including the southern Africa region, with many moving
from neighbouring Lesotho, Mozambique and Zimbabwe in search of work.

The unrest started on Sunday when an old building in the CBD caught fire
and collapsed, killing at least three people. It then spread to two
eastern suburbs and to the executive capital, Pretoria, where local media
reported shops burning in Marabastad – a central business area largely
populated by economic migrants.

Last week, hundreds of protesters in Pretoria set fire to buildings,
looted mostly foreign-owned businesses and clashed with police, who fired
rubber bullets at the crowds. The chaos broke out after local taxi drivers
clashed with alleged drug dealers in the area, according to the Sowetan
newspaper.

On Monday, a pamphlet circulating on social media, seen by The Associated
Press news agency, encouraged South Africans to chase foreigners out of
their communities.

The pamphlet, attributed to a group called the Sisonke Peoples Forum,
accused foreigners living in South Africa of selling drugs and stealing
jobs, both common refrains during the regular flare-ups of violence
against foreigners in the greater Johannesburg area in recent years.