You won’t get help from region, ED tells critics 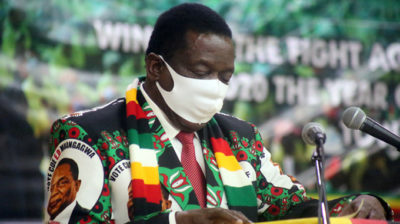 “So you are wasting your time.“This meeting (central committee) comes after another crushing failure of machinations by our detractors on social media to reverse and destabilise the unity peace, security milestones.”

He added: “I applaud the party and the people of Zimbabwe and leadership of the party for remaining resolute in the wake of the opposition’s regime change agenda and worrying levels of self-hate through a sustained call to make our country ungovernable saying there is a crisis in Zimbabwe.”

Mnangagwa also dismissed claims that there was bad blood between the South African ruling party, African National Congress (ANC), and his Zanu PF party following weeks of exchanges between the two liberation parties over the crisis in the country.

“The crisis exists in their minds, it exists in their parties. The crisis exists in their bedrooms, not in Zimbabwe,” he said.
Ramaphosa has dispatched two delegations to Harare to have an appreciation of the situation following reports of gross human rights violations head of the foiled July 31 protests.
Although Zanu PF has insisted there was no crisis in the country, the ANC delegation led by Ace Magashule, the secretary-general of the South African ruling party, has maintained that the country was a “mess” following reports of abductions, politically-motivated arrests and torture of perceived opponents, including journalists and lawyers, ahead of the July 31 protests.

Mnangagwa, whose regime has hogged international media for the human rights abuses, closed the door on external mediation to end the crisis.
“We will not seek outside mediation to deal with challenges which they themselves have,” Mnangagwa said, in apparent reference to the ANC intervention, but insisted there was no bad blood between the two liberation movements.

“The solidarity existing between our party Zanu PF and other sister revolutionary parties like the ANC of South Africa can never be shaken by social media. We have elements peddling falsehoods that there is misunderstanding between ANC and Zanu PF, there is nothing (like that),” he said.
On churches, Mnangagwa said the Zion Christian Church, whose farming programmes he officiated on Thursday, must focus on productivity and stop wasting their time complaining about the human rights situation in the country.

His call was a not so subtle attempt to silence vocal church groups, including Catholic bishops, who have condemned his administration on human rights violations.

“I call upon churches in our country and the nation as a whole to shift our mind set and reorient our discourse towards economic productivity not to have malicious claims of ‘human rights, human rights’. We need productivity. The development of a country is productivity based,” he said.

“No country develops out of demonstrations. Let us shun divisive and evil concoctions by merchants of doom and their handlers who are bent on keeping our country stuck in a cycle of disunity and confusion. Let us continue to preach unity, peace, love and harmony so that we develop our nation.”