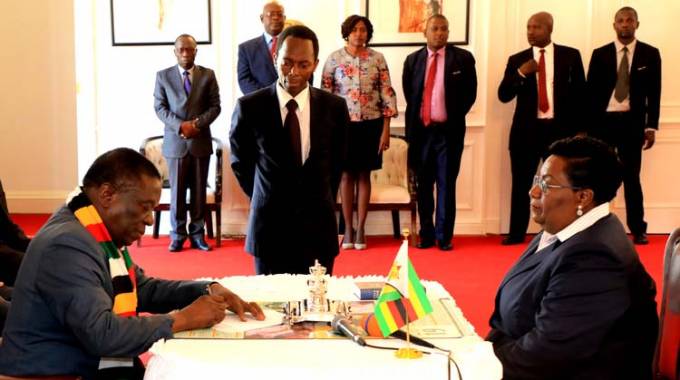 THE Zimbabwe Anti-Corruption Commission (Zacc) chair has lambasted the current docket keeping system, which may result in loss of key information in criminal cases, and the institution is moving to modernise the records’ storage.

She bemoaned the critical lack of resources  , with 90 investigators sharing three vehicles, but insisted that these would not deter her from the bringing culprits to book. Already, she is studying the Auditor-General and NSSA audit reports,  with arrests expected soon.

In a no-holds-barred  interview with The Sunday Mail, Justice Matanda-Moyo  said Zacc was raring to go.

Parliament recently held public interviews for 38 prospective candidates and the names of the successful ones will be forwarded to President Mnangagwa, who will then appoint the 10 commissioners.

“My Commission will be functional. There is no room for corruption as any mishap will be dealt with severely. The new Zacc will not tolerate any corrupt officials,” said Justice Matanda-Moyo.

She was concerned about the shambolic record-keeping system, particularly for dockets at Zacc.

A digital docket management system is now reportedly in the works.

“The Commission’s records should be very secure and independent, hence we will be improving in that regard. I am just waiting for the commissioners to be appointed so that we make decisions on those aspects.

“You struggle to find dockets. One can ask for a particular docket and officers will go in circles searching for it. In one instance, a docket was finally found at the National Prosecuting Authority (NPA). That is undesirable. A docket management system should be done in a press of a button.”

The Zacc chair said a list of the graft-fighting body’s requirements will soon be forwarded to the Office of the President and Cabinet, and the Ministry of Finance and Economic Development.

“In terms of investigators, we do not have the adequate numbers as we are currently riding on secondment from the police and other State institutions.

“There is less than half of what we are looking for, thus we have 90 — that’s in Harare.”

Justice Matanda-Moyo — a seasoned High Court judge — said Zacc will sign an agreement with the University of Zimbabwe to train investigators in forensic accounting, financial intelligence and cyber-crimes to enhance skills in fighting white-collar crimes.

There are also plans to introduce a new law to protect whistleblowers.

The former Dr Job Wabhira-led Zacc, she added, was dysfunctional.

She also rubbished claims of conflict of interest in her appointment as Zacc chair at a time when her husband — Dr Sibusiso Moyo — is Minister of Foreign Affairs and International Trade.

“Why didn’t you raise the issue of conflict (of interest) when he was appointed Minister since I was already a High Court Judge?

“My marriage and job are two different things. I have been married to him for a long time. I am not marrying him today that I should be influenced by him. He is not the one who has mandated me to lead Zacc.”