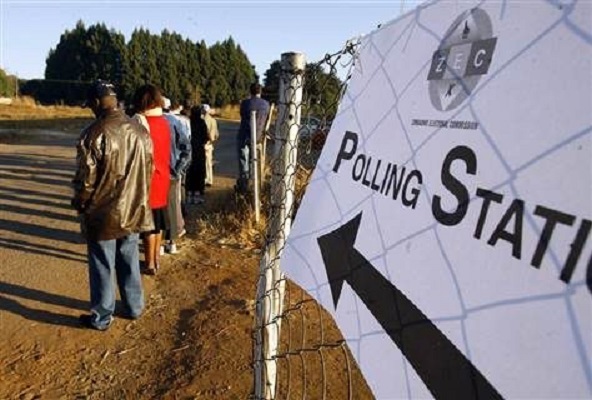 Zimbabwe Election Support Network (ZESN) says the political situation in Zaka East has so far been reported to be free and conducive for political campaigns, save for some reports of threats and unfair practices by the ruling party involving the distribution of food commodities to the selected recipients.

“Zanu PF launched its campaign on 17 August, 2019 in Zaka led by the party’s National

Political Commissar, Victor Matemadanda. The party has been conducting meetings and rallies ahead of the 21 September 2019 by-election.

“The MDC Alliance candidate, Derick Charamba has been conducting door to door campaigns to drum up support ahead of the by-election.”

Zimbabwe Election Support Network (ZESN) says the Zaka East Constituency has been a Zanu PF strong hold since 2008 elections. Zanu PF increased its votes from 2008 to 2018, with wide margin in 2013 and 2018.  “The main opposition’s votes dropped between 2008 and 2013 and increased slightly in 2018. The number of votes each of the two parties received in 2013 is not very different from what each got in 2018; they largely maintained their share of the electorate though with some increases in votes received. Although more political parties contested in 2018, each of the opposition political parties, and all of them collectively, got a small fraction of the votes cast.”

ZESN reports that Zaka East constituency comprises of seven Wards (20, 21, 25, 26, 30, 31 and 32). People in the area depend on subsistence farming and employment at Tongaat Hullet, Hippo Valley Estates and other sugarcane plantations in the Lowveld.

The area is predominantly rural, with a few descent modern houses and most of the people living in basic thatched houses.

Population Demographics According to the 2012 Census Report, Zaka District had a population of 181 301 people; 82 353 males and 98 948 females. The 2018 Zimbabwe Electoral Commission (ZEC) Biometric Voters’ Registration (BVR) Report revealed that, the Constituency had 15 934 registered voters.

“Voters’ Registration and Voter Education Processes By the time of the writing of this report the voters’ roll for the Zaka East by-election was not yet out. However, the District Elections Officer for Zaka revealed that they had not registered more than 10 additional people since the 2018 harmonised elections.

“According to ZEC, the voters’ roll will be polling station-based in line with Section 239 (c), (d) and (e) of the Constitution of Zimbabwe. The constituency has 38 polling stations,” said ZESN.

While the ZEC established a road map to the by-election scheduling Voter Education (VE) for polling for the period from 13 to 17 September 2019, the Commission conducted VE from 10 to 14 September 2019.

“ZESN conducted a CBOs training on 12 August aimed at equipping Community Based Organisations, CSOs, Faith Based Organisations, and Social Emerging Groups with knowledge on voter registration, the electoral cycle, community mobilisation and facilitation skills, sharing on the importance of citizen electoral education process, and conducting  VE for the by-election.

“At the invitation of ZEC, ZESN conducted VE for polling in the Constituency for the period from 13 to 15 September, 2019 with volunteers seconded from its member organisations,  namely the Media Monitoring Project of Zimbabwe, Zimbabwe Civil Education Trust, Progressive Teachers’ Union of Zimbabwe, and Women’s Coalition of Zimbabwe. The team targeted political party rallies, community meetings, church gatherings, and general citizens at public places such as shopping centres and community gardens. During the voter mobilization exercise, 4000 flyers were distributed.