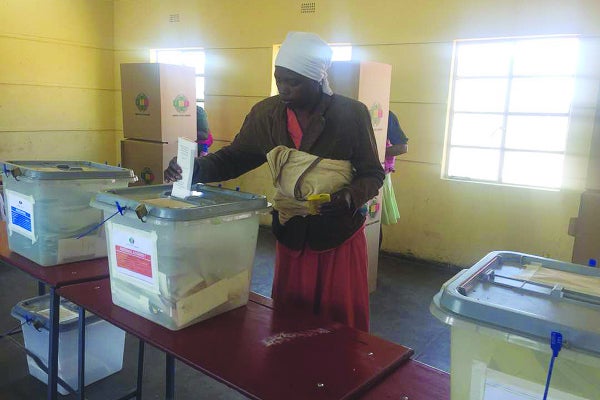 THE MDC Alliance has accused Zanu PF of vote-buying ahead of the Mangwe by-election in which their candidate Vincent Sihlabo will fight it out with the ruling party’s Hlalani Mguni and six other contestants on September 7.

Speaking to Southern Eye ahead of the MDC Alliance president Nelson Chamisa’s star rallies to be held in Brunapeg and Tshitshi next week, Sihlabo said voter intimidation was rife.

“Zanu PF is using some war veterans to intimidate the elderly people by constantly reminding them about war if ever they voted ‘wrongly’. The party also uses food as a political weapon. There is severe drought in the province and if somebody is not in the
system, that person is denied access to food from the government when the food is meant for all the citizens of Zimbabwe, regardless of political affiliation,” he said.

Sihlabo claimed that the ruling party used the same tactic last year when it distributed food to villagers towards election day in attempts to lure people to vote for them.

“They have also promised to drill boreholes for the villagers and we tell people to be wary of these last-minute promises, which may later turn out to be empty promises,” he said.

“We are on the ground. We have not seen it. If ever there are such malpractices or wrongdoings, they should go and report to the police as government has all the arms of security to deal with such issues,” Choeni said.

MDC Alliance Matabeleland South provincial chairman Njemnyama Moyo told Southern Eye that they were implementing a door-to-door campaign in the constituency ahead of Chamisa’s star rallies.

“We are preparing the ground through conducting door-to-door campaigns and will kick-start ward rallies in all the 15 wards in the constituency. We are expecting president Chamisa on Wednesday for our two star rallies that will be held in Brunapeg and
Tshitshi next week,” Moyo said.

“We urge people of Matabeleland South to vote for somebody who will bring about meaningful development in the province, which has lagged behind for so long due to empty promises by Zanu PF.”
The seat fell vacant after the death of former Home Affairs deputy minister Obedingwa Mguni following a short illness in June.