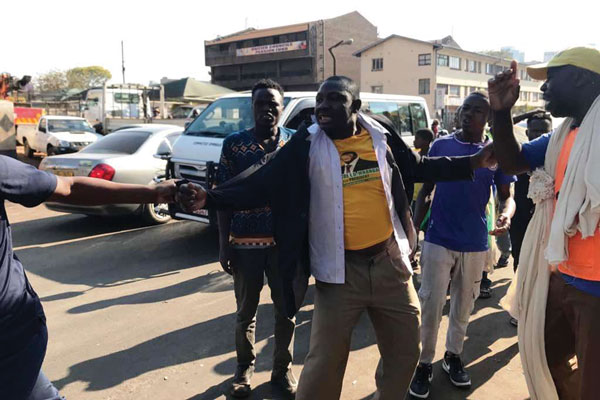 A GROUP of suspected Zanu PF activists yesterday morning went on the rampage in Harare central business district (CBD), confiscating and burning copies of Alpha Media Holdings publications, NewsDay and The Zimbabwe Independent, claiming their action was in protest against the recent increase in the cover price of the two newspapers.

The activists, who claimed to have been sent by a named politician, also accused NewsDay of writing unfavourable stories about the governing Zanu PF party.

AMH staff and the public quickly effected citizen arrests on the suspected Zanu PF apparatchiks and handed some of the suspects to Harare Central Police. Some of the vendors claimed their assailants had disclosed that they agreed with the position taken by Information deputy minister Energy Mutodi, who on Wednesday urged AMH to revert to the old prices.

He said Mutodi, instead of behaving like a “cowboy, a mafia of the old administration”, should visit AMH to appreciate challenges the media industry was experiencing.

“We are all working very hard to try to rebuild and rebrand and try to get Zimbabwe attractive and work again, but this man is destroying all the efforts,” Ncube said. “This cannot be condoned. He should be reminded this is a new dispensation and that his behaviour belongs to the past.”

Ncube said AMH would continue to play the game to the rules, and “not massage Mutodi’s inflated ego”.

The media group on Wednesday reviewed the cover prices of its three leading newspapers, NewsDay, The Zimbabwe Independent and The Standard in response to the increase in the cost of newsprint, ink and other materials in the past few months.

Channel development manager Hatred Mandungumana, said 16 vendors were attacked and 277 copies of NewsDay and 77 of the Zimbabwe Independent were destroyed.

He said he received a call early yesterday morning that 100 copies had been confiscated from a vendor who distributes subscription newspapers. The newspapers were burnt at the intersection of Samora Machel Avenue and Julius Nyerere Way.

While on his way, Mandungumana was again alerted that some vendors had been attacked at corner Samora Machel and Rotten Row, where three of the assailants in Zanu PF regalia had been apprehended.

The suspects had been dropped around the CBD by a twin cab truck and Toyota Ipsum vehicle with no registration numbers.

“They were put in an AMH staff bus and while on our way to the police station, two more jumped into the bus to try to rescue their colleagues, but failed,” Mandungumana said.

“Along the way, they were briefing someone on the phone of the developments and we overheard them being assured of release at the police station.”

But Mutodi yesterday denied responsibility, claiming the people who torched the papers could be angry Zimbabweans unhappy with the hike of the papers’ cover price.

“This could have been done by a patch of Zimbabweans unhappy with the unwarranted hike in newspaper prices,” Mutodi said.

AMH acting managing director Brian Maphosa said he was disturbed by the conduct of the activists whose actions left one vendor hospitalised.

Maphosa said he hoped the law will take its course.

“We are very disappointed by the events of this morning. We hope the law will take its course on the perpetrators who were caught and some who volunteered themselves. Thank God there was no loss of life,” he said.

Maphosa said the cover prices were increased in line with the economic fundamentals prevailing in the country.