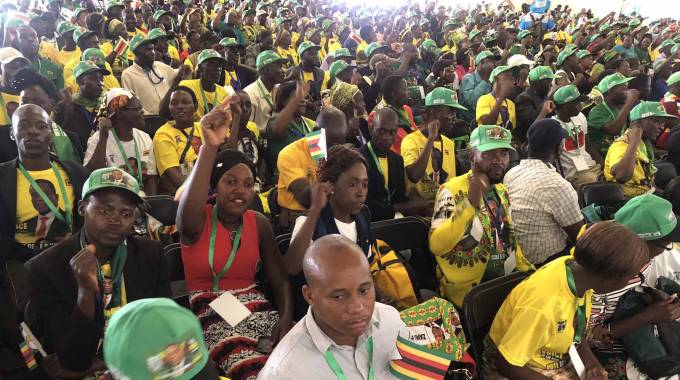 Zanu-PF is poised to garner the envisaged five million votes in the 2023 elections if party structures work together to achieve the goal, President Mnangagwa has said.

In his foreword to the Central Committee report tabled at the official opening of the 18th National People’s Conference here on Friday, President Mnangagwa said the party was determined to self-introspect, rejuvenate and modernise as it revitalises structures, strategies, policies, programmes and policies.

He said the party had already reintroduced District Coordinating Committees and established the War Veterans League as a fully fledged branch of Zanu-PF to ensure that the organisation is in touch with the people.

“This is necessary for a revolutionary mass party. Indeed, ‘the people are the sea and we are the fish swimming in the sea.’ Such an approach will see us dominating elections in perpetuity.

“The Commissariat Department, working in liaison with the Women’s League, the newly formed War Veterans’ League, the Youth League and the Herbert Chitepo School of Ideology, has the onerous responsibility of mass mobilisation towards economic development and in readiness for the 2023 elections. The party can certainly achieve the envisaged five million voters as targeted by our Commissariat Department,” said the President.

“To this end, we must put in place robust mobilisation programmes that are directed by scientific methods to guide the factual growth of our membership from cell to the national level. These mobilisation techniques must be pragmatic, realistic and responsive to the realities of today’s society. However, this membership projection can only be realised when unity, peace, love and tolerance are embraced by all cadres of the party. Vices such as factionalism, regionalism, tribalism, intolerance and corruption have no place in our party.”

President Mnangagwa said corruption remains one of the major challenges to Zimbabwe’s efforts towards accelerated economic recovery and as such, Zanu-PF has strengthened its institutions both at party and Government levels to fight the scourge.

He said transparency and accountability were key in the Second Republic, and the ruling party had set up a commission of inquiry constituted by distinguished personalities in the party to investigate cases of corruption.

The Zimbabwe Anti-Corruption Commission had been strengthened to deal with graft, he added.

“The scourge of corruption remains a monumental challenge in our society requiring the party to strengthen its watchdog role to enhance the efficient and effective use of the resources in our country.

“A commission of inquiry was appointed in the party, which is made up of eminent elders of high integrity who will handle all cases relating to the eradication of this vice.

“Meanwhile, the reconstituted Zimbabwe Anti-Corruption Commission is working diligently to ensure the filthy practice is eliminated.

“This demonstrates our party’s unequivocal commitment to cleaning society of this cancer. The Second Republic espouses constitutionalism, good governance, transparency, accountability, integrity, honesty and hard work. These virtues should be firmly embedded in all our people and shall be exhibited when we deal with the public affairs in both the party and Government.”

President Mnangagwa said the party was supreme to the Government and in line with that policy, all cadres deployed to Government would be held accountable.

Government and party officials, he added, should acquire relevant and modern skills that are needed to serve the people.

The Transitional Stabilisation Programme (TSP) had managed to refocus the country’s economy towards sustainable growth, he said.

“The necessary policies and institutional reforms to transform the country to a private sector-led economy have been introduced, with positive results now beginning to show. Government has also put in place comprehensive policy instruments which will accelerate the empowerment of women, youths, SMEs as well as ensure the development of vibrant rural industry systems. The innovation, incubation and commercialisation of locally developed products are being supported to stimulate our manufacturing sector.”

He said the Zanu-PF Government also took deliberate measures to incentivise all sectors of the economy to increase their productive capabilities.

President Mnangagwa said the conviction and determination to succeed and prosper should originate from within.