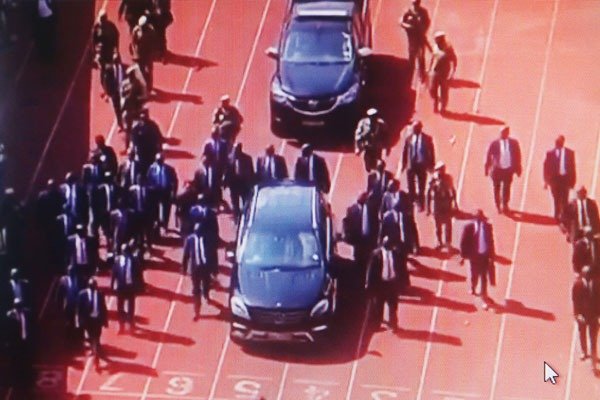 Esigodini feels under siege as the ruling Zanu PF’s seventh national conference gets into full swing in this quiet, gold-rich farming town of Matabeleland South province, with a heavy presence of State security agents.

The ruling party’s annual indaba is being held this week with main proceedings kicking off today.

The atmosphere is tense as a cloud of fear hangs above, and every foreigner is viewed with apprehension by locals due to the heavy deployment of security apparatus in the area.

Hundreds of police details, including the riot squad armed with service rifles, canines and a single water cannon truck are on standby at Esigodini Police Station.

All roads leading in and out of the town are littered with security checkpoints manned by heavily-armed officers from the Support Unit and army, among other security agencies, creating a siege mentality reminiscent of the Gaza strip in war-torn Palestine.

Driving into the town, one can smell the fear and anxiety in the hearts of Esigodini residents.

The security apparatus has reportedly also imposed a “curfew” in the town, with residents expected to be indoors by 8pm.

Bars and nightspots are also likely to close at the same time, depriving residents and gold panners, who have a huge appetite for spending on wise waters until wee hours, the much-needed entertainment.

However, one gets some solace and comic relief by marvelling at the imposing billboards emblazoned with Zanu PF leader, President Emmerson Mnangagwa’s image littering the whole area.

At the venue, Umzingwane High School has been turned into Disney Land, with the many flamboyant renovations.

A tarred road along the Bulawayo-Gwanda Highway ushers you for about three kilometres to the school which is the venue of the Zanu PF jamboree.

The grounds are well-kempt and the marquees erected on the school grounds put the icing on the otherwise new “Garden of Eden” where the “Adams and Eves” of Zanu PF are going to wine and dine all week-long.

A resident of Habane township, Japhet Dube, who spoke to NewsDay intermittently checking out his surroundings, was not amused by the situation in his backyard.

“What Zanu PF has done was like coming into one’s household, hold him captive and throw a lavish party.

We are not even free to move because there are also stop and search operations.

We can’t move after 8pm.

If they came to enjoy with us, where is the fear coming from to warrant such a high number of security officers?” Dube asked rhetorically.

Another resident, who spoke on condition of anonymity, said Esigodini residents were in some form of house arrest.

“We can’t move around freely.

One has to check his or her surroundings before getting into a conversation.

We just wish they do their things and go, so we become free again,” she said.

However, Joseph Nyathi from the same suburb was of a different view, as he said the conference had brought development to the town

“I wish the conference was held here every year. Residents have had brisk business selling their wares.

This is also going to increase when more delegates are here.

Our roads have been upgraded; the town is also clean.

Even Umzingwani High School itself, the venue, is now a state-of-the-art boarding facility because of the renovations brought by the conference,” Nyathi said.

It’s all systems go as everything is now in place for the event.

Esigodini has been placed under security lockdown ahead of Mnangagwa’s visit scheduled for Friday, six months after he survived a deadly bomb blast at a campaign rally that killed two of his aides and injured several senior party officials in Bulawayo.